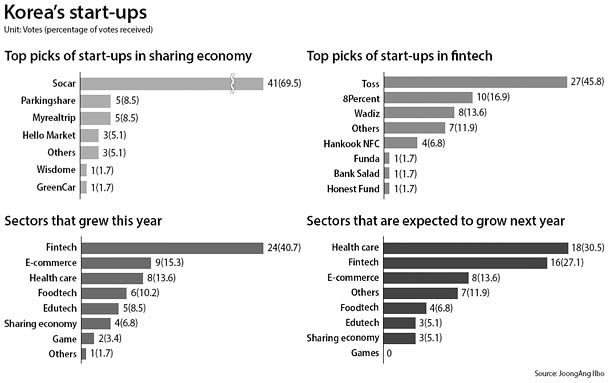 Start-up experts said the fintech industry, short for financial technology, was the sector that grew the most rapidly this year. The JoongAng Ilbo surveyed 59 entrepreneurs and start-up insiders and 48.5 percent of them chose Toss, a money transfer service, as the biggest player in the market.

“Toss has been expanding rapidly in the market by actively using the social media platform,” said a spokesman for Platfarm, a company that provides emoji to mobile-phone users. 8Percent, a company that provides loans and investment services, was the second biggest player in the fintech market, with 16.9 percent of the votes, and Wadiz captured 13.6 percent of the votes. Wadiz is one of the biggest crowdfunding services in Korea.

In the food and sharing sector, food-delivery app Baemin and car-sharing app Socar were chosen as the biggest players. The two companies were the only ones to receive more than 50 percent of votes from insiders who were asked whether certain companies are likely to expand.

A total of 34 respondents, or 57.6 percent, ranked Baemin first in the food-related sector. “Baemin managed to grow rapidly by providing services both online and offline,” said an insider. A spokesperson from the start-up JellyBus said it is very impressive how Baemin expanded their business in such a short period.

Plating, a food-delivery app, ranked second in the food-service sector with 10.2 percent of the votes, which was followed by Dining Code with 6.8 percent.

Socar received 69.5 percent of votes from insiders who were asked to pick the start-up leading the sharing economy industry. Parkingshare (8.5 percent) and Myrealtrip (8.5 percent) ranked in second place, but the gap between them and Socar was huge.

“Socar is the main icon of the sharing economy in Korea,” said an employee at a start-up called Yellow Market Place. One expert added, “Socar is having a big impact on people’s lives and it managed to make the car-sharing business popular in the nation even though the regulations on such business is pretty tough.”

Survey participants chose Coupang as the biggest player in e-commerce and the company received 39 percent of votes. Many of the survey respondents said Coupang’s rapid delivery service called Rocket Delivery is one of the online retailer’s biggest strengths.

The experts weren’t able to pick big players in start-up sectors not related to food, sharing, fintech or e-commerce. Dot, a start-up that provides services to the disabled, ranked first in the Internet of things sector with 22 percent of votes. It was followed by Awair, which provides air-purifying services.

Experts also were split on leaders of health care start-ups. Genoplan, a company that analyzes genomes for its clients, ranked first with 27.1 percent of the votes and was followed by Lunit with 15.3 percent and BBB with 13.6 percent.

Meanwhile, many experts were pessimistic about the outlook for the start-up industry. Some 32 percent of the survey respondents said that the industry will be weakened next year, while 30.5 percent of them said it will remain unchanged. Another 25.4 percent said the market will improve.

“I see a lot of newly developed technologies in the health care sector recently and I think it is just the beginning,” said an industry insider.

The JoongAng Ilbo chose companies based on data from Startup Alliance, an institution funded by the government and the private sector, including Naver, the nation’s biggest portal service provider.