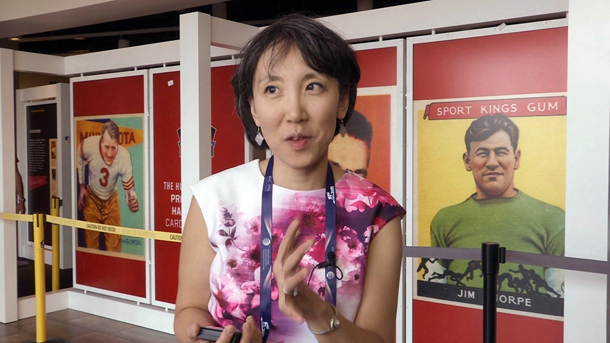 Lisa Shin, who served as an adviser to the National Diversity Coalition for Trump during his presidential campaign, says there is much enthusiasm about Donald J. Trump. [LISA SHIN]

Among the speakers for the 2016 Republican National Convention in July was Lisa Shin, a Korean-American optometrist. She was the only Asian-American who spoke at the event. Dr. Shin has served as one of the 60 advisers to the National Diversity Coalition for Trump, the U.S. President-elect Donald J. Trump’s campaign organization established with the stated aim of reflecting the will of ethnic minorities in America.

“I think for Hillary, she had a lot of paid people,” said Dr. Shin during a phone interview with the JoongAng Ilbo. “But I didn’t hear a lot about grass-roots activists like I did with Trump. I believe that there was so much momentum, energy and enthusiasm with Trump. Hillary was disconnected from the people. She was what we call elite. She thought she was privileged.”

Dr. Shin hopes to play an advisory role representing Korean-Americans in the Trump administration, although she has not received any formal requests from the transition team yet. The following is an excerpt from the interview.

Q. Did you expect Trump’s victory?

A. I was at an election watch party with some Republicans. He got Ohio, Florida and then Pennsylvania. We knew he was going to win because those are the states we call battleground states and they make a big difference. We were all screaming, hugging and laughing. I didn’t expect Trump to win the way he did. I thought it would be a very close victory.

How did you feel about public opinion during the campaign?

Well, almost all of us were very nervous because [of] the mainstream media. I read all kinds of things, very depressing. But then I knew, how could that be right when so much momentum is on Trump’s side? How could there be so many people who were grass-roots like me, just ordinary people, giving so much of their own time and money for Trump’s rallies? … You see the crowd, rallies and everyone cheering and you never saw that on Hillary’s side.

Do you think that’s why Trump won?

I think he really understood the middle class. He really communicated well with the middle working Americans. Many of them have lost jobs and have really been hurt under Obama’s policies for the past eight years. And I think Trump’s message was very strong. He said, “I will be your voice. I will protect American workers.” Hillary went in the critical states like Michigan or Ohio and said, “I’m going to shut down the coal industry,” and everyone was like, “what?”

I’m sure there were lot of volunteers on Hillary’s side but my impression was that Hillary had to pay more people. I heard someone quit their job to campaign for Trump. I think this level of commitment for Trump was much more than for Hillary. I think for Hillary it was, “Oh, I’ll vote for her.” It wasn’t enthusiasm.

There is an ongoing anti-Trump demonstration nationwide. What’s your perspective on this?

It’s in a few cities but I think it’s just shameful. You can do peaceful protests but some of these protests are destroying properties, it’s just lawlessness. I hope this will come to an end soon.

What changes do you think the Trump administration will bring?

He already talked about addressing corruption. He wants to take very specific steps to stop foreign lobbyists raising money for the election and limit terms for members of Congress. Members of Congress shouldn’t be there for 18-20 years. They sell out the interests of the Americans because of money. So I think Trump is going to take some steps to address that.

He also wants to strengthen the economy - more prosperity and opportunity for all Americans, including Korean-Americans. So I think it’s going to be good for small Korean businesses because he wants to decrease taxes and regulations.