Echoes of the IMF fiasco in Korea’s present crisis

Echoes of the IMF fiasco in Korea’s present crisis

On Nov. 21, 1997, the country was shocked by an unprecedented announcement from then-President Kim Young-sam’s administration.

“The government has decided to request International Monetary Fund assistance to overcome recent difficulties in the financial and foreign exchange markets,” said Lim Chang-ryeol, the finance minister at the time.

To this day, the IMF fiasco is still the biggest crisis that Korea has ever faced, even when compared to the global financial meltdown of 2008, and nearly two decades later, Asia’s fourth-largest economy once again finds itself in similarly dire straits.

The operating ratio of Korean plants has fallen to the 70 percent range, and Korean companies, pushed to the point of restructuring, are still struggling in a sea of uncertainty. President Park Geun-hye’s approval rating has fallen to a dismal 4 percent, and leadership has disappeared in the face of political bickering. Public servants, left without a captain, are steering a rudderless ship.

All signs point to the possibility that the crisis of 1997 might repeat itself. When looking at various economic indicators today, it is difficult to brush off such concerns as exaggeration. Growing household debt, trade protectionism abroad and weakened industrial competitiveness all pose threats to the Korean economy.

Some experts believe the absence of strong leadership, now made worse by a ballooning presidential scandal, could harken the beginning of an economic crisis.

“Without a strong political system and new political leadership, we could face a crisis even bigger than the IMF crisis,” said Kang Bong-kyun, a former finance minister.

But there are several differences between Korea’s situation in the late 1990s and today. One is the amount of foreign exchange reserves, which only amounted to $30.5 billion in October 1997. As of October this year, reserves total $375.1 billion. The country’s credit score, too, is better today, with Moody’s rating Korea Aa2, higher than even neighboring Japan.

At the same time, there are also similarities to the conditions that led Korea to its biggest financial crisis in history. 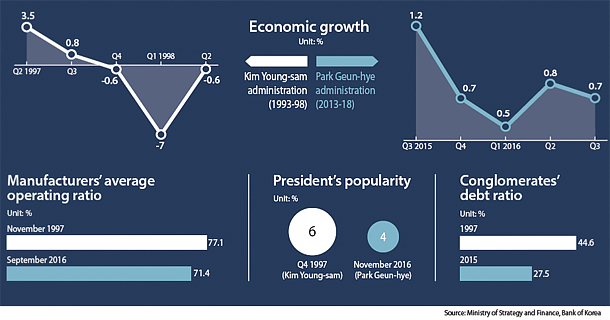 In 1997, top government officials working in the Kim Young-sam administration were busy building up power but lacked in actual execution of policy. Corruption crippled the government and overall leadership.

The situation is, perhaps unsurprisingly, similar to today as President Park’s closest aides have been arrested for conspiring with her close friend Choi Soon-sil and the president herself has been unable to perform her full duties as head of state.

Another problem confounding Korea today that recalls the 1997 crisis is the country’s massive amount of debt. The only difference is that back then, the debt that crippled the economy was corporate debt, but today, household debt has been breaking record levels and is now considered a major risk.

In the 1990s, Korean companies were taking out loans at low interest rates and making reckless investments. Some money was put overseas, others in projects that overlapped other businesses.

As companies failed to reach the potential expected from their lenders, the size of their debt, especially on loans borrowed on foreign currency, escalated sharply, and the Korean won depreciated against the U.S. dollar. Banks tried to fill up the losses, but they quickly became insolvent.

The IMF pointed fingers at Korean companies for their reckless management and strong ties with the government, and advised them to lower their debt-to-equity ratio to below 200 percent.

Today, the IMF is once again sounding warning signals about Korean debt, this time about rising household debt. In an August report, the organization said the Korean government should tighten its debt regulations to lower the risk caused by household debt. The IMF said the debt-to-income ratio cap of 60 percent was too high when compared to neighboring economies and recommended lowering it to the 30 to 50 percent range.

Korea’s household debt, from mortgages, unsecured loans and credit card purchases, was equivalent to 61 percent of the country’s gross domestic product in 2002. Last year, it was 77.2 percent.

Things could get worse if the Bank of Korea decides to raise interest rates in response to a possible hike by the U.S. Federal Reserve next month. The debt burden, especially on low-income households, would undoubtedly go up. “This has the risk of reducing spending, shrinking the domestic economy and leading to worse company performance,” said Kim Tae-joon, an economics professor at Dongduk Women’s University.

It’s not just debt held by households but also public institutions’ debt, largely concentrated in energy and urban development agencies, that poses concerns. When compared to other countries, the debt held by Korea’s public agencies may be relatively small, but if the government’s fiscal soundness continues to worsen, the debt burden could get heavier.

Other similar adversities that Korean companies face include corporate restructuring and fierce competition from Chinese rivals.

In the mid-1990s, Korea’s economic growth was led by a construction boom stemming from a government project to build two million housing units. But when the IMF crisis hit, realtors had trouble finding buyers, and medium-size construction companies went bankrupt.

The housing market today is walking on similarly thin ice. There is speculation that an oversupply of housing units between 2014 and 2016 will bring about a sharp drop in sales during the next two years.

Other key industries such as shipping, shipbuilding and steel continue to struggle from restructuring and a sluggish global market. Electronics and automobile companies are busy trying to stay ahead of Chinese competitors, who have managed to catch up to Korean firms in recent years.

Analysts are equally pessimistic about the economic outlook and loss of growth engines as they were in the late 1990s. The Ministry of Strategy and Finance, which set a goal of 3.7 percent annual growth in 2014, has been lowering its outlook every year and finally broke below 3 percent this year.

The unemployment rate last month was 3.4 percent, the highest for October in 11 years. The last time unemployment was so high in October was in 2005, when it was at 3.6 percent. The future is looking bleaker, as companies are cutting back on investment.

Experts say the economy is all about sentiment. When consumers and companies have confidence in the economy, things roll along smoothly. During a meeting last month, the Bank of Korea’s governor, Lee Ju-yeol, made a reference to “self-fulling crisis” where an economic crisis is caused not by poor economic fundamentals or impossible government goals but by investor pessimism. He said such an attitude itself can only make the future more difficult.

This is not to say there aren’t people who are optimistic that the Korean economy will ride through these troubled times better than it did during the IMF crisis. After all, the country’s economic fundamentals and external credibility have improved significantly since the late 1990s.

But that hasn’t stopped some observers from pointing out that a crisis emerges every 10 years, as was the case in 1997 and 2008.

“There’s a possibility that [the Korean economy] will be faced with a low-growth cycle similar to that of Japan rather than a global crisis that starts from the United States,” said Yoon Jeung-hyun, a former finance minister. “First, we need to recover political leadership and then come up with a comprehensive plan for each different sector that targets raising the growth potential.”