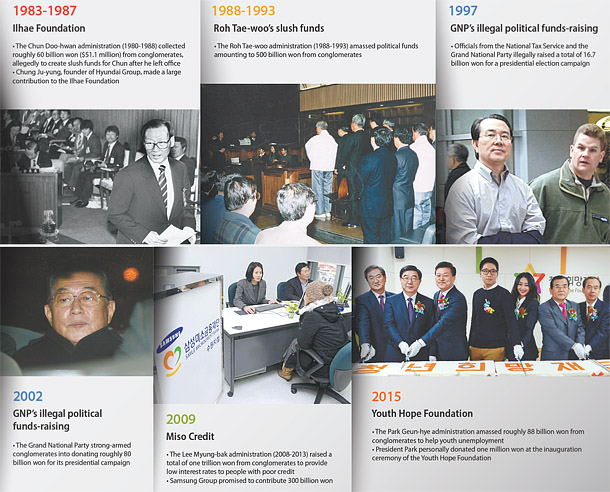 The criminal charges filed so far in the current scandal focus on the Mi-R and K-Sports foundations, which were allegedly created on the orders of Park and controlled by Choi. Donations of 77.4 billion won ($65.75 million) from 53 companies were raised in a few days after they were launched.

Yoo Yeong-ha, the president’s attorney, claimed on Nov. 20 that the two foundations were no different from those started by former administrations, which he said were supported by conglomerates and benefited the public.

The Park Chung Hee administration (1963-1979) was notorious for leaning on companies for cash and giving business perks in return. Park, the late father of the current president, collected political funds largely by receiving kickbacks in return for handing out business licenses and contracts for construction projects, with the help of the Korean Central Intelligence Agency.

But Park wasn’t thought to have personally enriched himself.

The Chun Doo-hwan administration (1980-1988) established the Ilhae Foundation, which in many ways resembles the Mi-R and K-Sports foundations. The Ilhae Foundation - Ilhae was Chun’s pseudonym - was launched for the supposed purpose of supporting the victims of the 1983 bombing in Rangoon, North Korea’s attempted assassination of Chun during an official visit to Burma. Chun was unscathed but 21 members of his entourage were killed and 46 wounded. The foundation was also supposed to promote athletes. The foundation collected roughly 60 billion won from Hyundai, Daewoo and Sunkyung, today’s SK.

At the end of his term, Chun was accused of forcing companies to donate to the foundation, which would be used to support him after the presidency. But a special investigation team at the time failed to prove that case. The Ilhae Foundation later became the Sejong Institute, which now focuses on research activities.

The Roh Tae-woo administration (1988-1993) amassed 500 billion won of political funds from big companies. “The ruling party has largely appropriated political funds from conglomerates,” wrote Roh in a memoir published in 2011. “The heads of conglomerates asked for one-on-one meetings with me after the 1988 Seoul Olympics and handed over envelopes at the end of the meetings. The fifth and sixth Republic of South Korea had a single window for political funds - the Blue House.”

Roh was sentenced to 15 years in prison and ordered to pay a 262.8 billion won fine in 1997 for accepting bribes. The investigation of Lee Kun-hee, chairman of the Samsung Group, and Kim Woo-jung, chairman of the Daewoo Group, for bribery resulted in acquittals, while Roh received a pardon in December of 1997. Roh completed the payment of his fine in 2013.

In 1997, then-deputy head of the National Tax Service Lee Suk-hee and Grand National Party lawmaker Suh Sang-mok were found to have strong-armed 23 conglomerates into donating roughly 16.7 billion won to a presidential campaign. Lee fled to America, forcing a pause in the investigation of funds for Lee Hoi-chang’s presidential campaign. Lee Suk-hee returned to Korea in 2003 and was sentenced to a year and six months in prison the following year.

A high point of the government’s illegal fund-raising came in 2002 when the Grand National Party received roughly 80 billion won from conglomerates for its presidential campaign. A probe in 2003 revealed that LG brought 15 billion won in cash in tens of boxes to a meeting place on the Gyeongbu Expressway, the most travelled expressway in Korea. Samsung, Hyundai Motor and SK made contributions worth 34 billion won, 10.9 billion won and 10 billion won respectively. The party’s finance officer Choi Don-woong was sentenced to a year in prison in 2004 and related officials were also found guilty.

In the same election, Roh Moo-hyun was also found to have raised 10 billion won in campaign funds from Samsung, SK and Hanwha.

The 2002 scandal led to the revision of the political funding law in 2004 to forbid corporate bodies and organizations from sponsoring lawmakers and to limit individual funding to a maximum of 5 million won a year. But it was around this time when a new practice emerged: accepting corporate contributions to government projects.

The Lee Myung-bak administration (2008-2013) used this practice to strong-arm money for its four-rivers restoration project and green growth project. Donations were also given to Miso Credit, a micro-finance project. Samsung, Hyundai Motor, SK, LG, Lotte and Posco promised to raise a total of one trillion won for Miso Credit.

“Conglomerates agreeing with a cause and the government imposing a target figure are two different things,” said then-lawmaker of the Democratic Party Hong Young-pyo. “This is a typical example of government-controlled financing.”

Despite similarities, however, the Miso Credit differs from the Mi-R and K-Sports foundations in that conglomerates built and operated the foundations without the involvement of the government.

The Park Geun-hye administration established the Youth Hope Foundation in 2015 to help unemployed young people and received roughly 88 billion won in donations from big companies. “A group of 11,305 young people received government subsidies,” said Lee Yong-deuk, a lawmaker of the main opposition Minjoo Party of Korea, “but only 5 percent of them were employed as a result.” He added, “The administration collected contributions but it didn’t have any impact.”

Another key project of the current administration collected a staggering amount of funds from Korea Inc.: the 18 Centers for Creative Economy and Innovation, which aim to build partnerships between local governments and top conglomerates. Amid illegal-funding allegations, suspicions remain that Cha Eun-taek, a confidant of Choi, was deeply involved in that program.