The monster inside us

The monster inside us 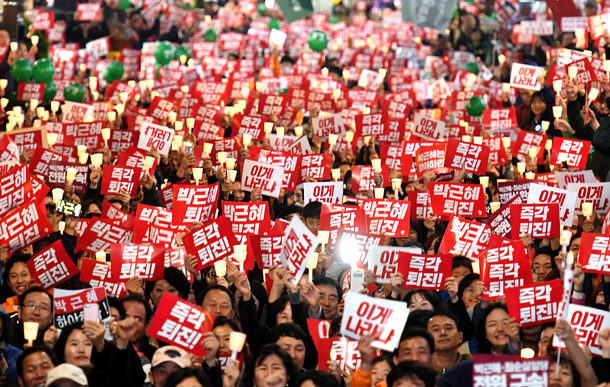 President Park Geun-hye’s approval rating dropped to 4 percent last week, the lowest in Korean presidential history. In other words, 96 percent of Korean people disapprove of her. It is surprising that 96 percent of people have the same thoughts in a democratic country where everyone is free to have their own ideas. That’s because the public has experienced extreme shock, rage and a sense of betrayal. For several weeks, newspaper editorial pages and social media have been flooded with calls for President Park to step down.

But then I had a different thought after seeing the controversy surrounding hip-hop trio DJ DOC’s plan to perform a new song, “Address Known,” at last weekend’s protest rally in Gwanghwamun Square, a performance that was later canceled. Even as we claim that we are punishing a leader who ignored criticism and the rule of law while abusing power undemocratically, we, too, might be trapped by uniform thinking that leads us to only one answer. I am uncomfortable with the hypocrisy inside us that prompts bias and hatred in the name of a greater cause.

After the performance was canceled due to the song’s lyrics, which expressed hatred toward women, Lee Ha-neul, a member of the trio, complained that “we must not fight with each other and spoil the essence.” Many arguments were posted on social media that the incident was an act of censorship by some women’s groups, and they complained about the canceled performance.

If the trio truly had no intention of promoting hatred toward women, they could have just changed the problematic parts of the lyrics and performed the piece. The song was already made public, and there was no reason to apply the framework of censorship or criticize those who took issue with it.

There is no reason to repeat again the failures of President Park, who has paralyzed state affairs and disgraced the country. And the public servants around the president who contributed to destroying the country do not even deserve criticism. That is why everyone is holding up candles to condemn the monsters.

In the book “Lies of Koreans,” which analyzed 1,000 Korean lies for five years, the author wrote, “Anyone can be a monster, when one is brutal to others while being generous to one’s self.” Now, we are holding candles against one monster, but unless we fight the hypocrisy inside us, anyone can become a monster.