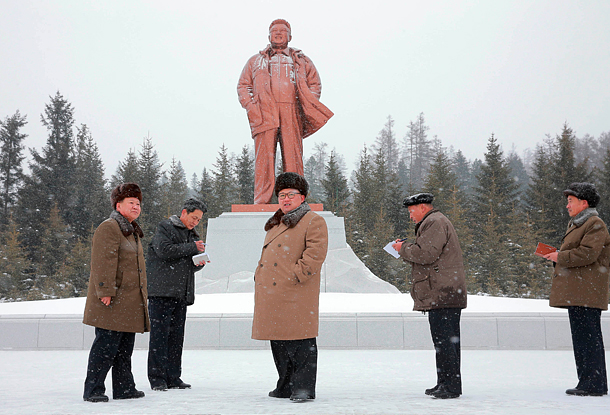 North Korean leader Kim Jong-un makes a visit to Samjiyon County in northeast Ryanggang Province, which is at the base of Mt. Paektu and formally described as his father Kim Jong-il’s place of birth, in this photo released by North Korea’s Korean Central News Agency in Pyongyang on Monday. [AP/NEWSIS]

Samjiyon in northeast Ryanggang Province is also said to be the place where the young Kim, in a meeting with his aides, decided upon the shocking execution of his uncle Jang Song-thaek, once the second-most powerful man in the country, in late 2013.

That visit was publicized in the state-run media on Nov. 30, 2013, before Jang was arrested. Analysts are wondering whether the new visit presages another dramatic event.

The North’s official Korean Central News Agency (KCNA) reported that Kim paid tribute to a bronze statue of his late father Kim Jong-il, which was unveiled in September, as snow fell over the region.

As he paid tribute, the young Kim was reported as calling for prosperity and to “create a powerful socialist nation,” as his father wished for. He said, “I hope he can see the miracles that are created upon this land.”

Kim visited various construction projects in the county, including a cultural center undergoing renovation, and observed the training of skiers from the Sajabong Sports Team, said the KCNA.

During the visit, Kim noted that projects underway in Samjiyon should be completed within three to four years and that the Workers’ Party formed a construction team to help the county flourish.

Dec. 17 marks the fifth anniversary of the death of Kim Jong-il.

Next year also marks the 75th anniversary of the birth of Kim Jong-il and 105th anniversary of the birth of North Korean founder Kim Il Sung. North Korea places emphasis on fifth and 10th anniversaries and is expected to commemorate these anniversaries next year. In the personality cult of the Kim family, Samjiyon is regarded as a sacred place. It is a tourist destination with its own airport, as well as the location of a residence of the Kim family. The Samjiyon Grand Monument honoring founder Kim Il Sung is also erected in Samjiyon.

Kim was said to have been accompanied by officials including Choe Ryong-hae, a vice-chairman of the North Korean ruling Workers’ Party central committee, and Kim Yong-su, also a senior member of the party’s central committee.

The young leader’s visit to Samjiyon in 2013, ahead of the purging of his uncle Jang, marked a dramatic turning point in his rule that also helped form his inner circle.

Kim visited Samjiyon in November 2013 and held a meeting with a group of close aides and decided on the execution of Jang the following month. The aides that accompanied him to Samjiyon rose in Pyongyang’s elite ranks.