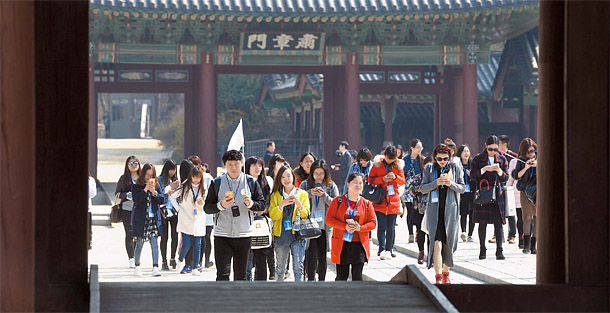 Korea’s regulations regarding tour guides have revealed several loopholes, with many resorting to guides who haven’t passed the state exam and therefore do not have a license. Critics say it’s time the government revises the laws to make it more resilient. [JOONGANG ILBO]

In spite of audio guides and augmented reality, people still tend to rely on human guides when they travel.

And generally, people believe what the guides say about the country, the people, their history and customs.

That is, unless they are already familiar enough with the destinations to recognize and correct erroneous information.

As Korea began to see an influx of foreign tourists - particularly from China - over the past decade or so, many critics have pointed to how some unqualified tour guides give incorrect information and tarnish the country’s image.

Some reports said, to many Koreans’ frustrations, that these guides say Korea’s Gyeongbok Palace of Joseon Dynasty (1392-1910) is the size of a toilet of China’s Forbidden City; that Korean women wore hanbok, the traditional clothing, to look fat so that they don’t look attractive and avoid getting raped by the Japanese invaders; and that King Sejong (1397-1450) got the idea for hangul, the Korean alphabet that he created, as he was looking at a latticed door, drunk.

That is what prompted the Korean government to revise the Tourism Promotion Law in 2009 so that tour agencies must send out a tour guide who has passed a state exam for “Tour Interpreters and Guides” and has a license.

However, this new regulation regarding the license of tour guides is showing many loopholes and even has led to violence, fraud and other crimes.

Korea’s tourism industry is at a critical juncture.

The country is hoping to make up for the loss in inbound tourists that they experienced last year due to an outbreak of Middle East respiratory syndrome (MERS).

But the crimes of Chinese tourists’ on Jeju Island began to make headlines, with the murder in a Catholic church in September being the biggest game-changer. Critics argue that Korea should re-examine its tourism industry in general and focus more on quality rather than quantity.

Japan, on the other hand, is set to eliminate requirement for tour guides to have licenses, the Nihon Keizai Shimbun reported in September, in hopes of boosting inbound tourism ahead of the 2020 Tokyo Olympic.

Against this backdrop, the Korea JoongAng Daily examined the issue of tour guides, who often are an integral part of one’s travel experience in Korea and anywhere else. 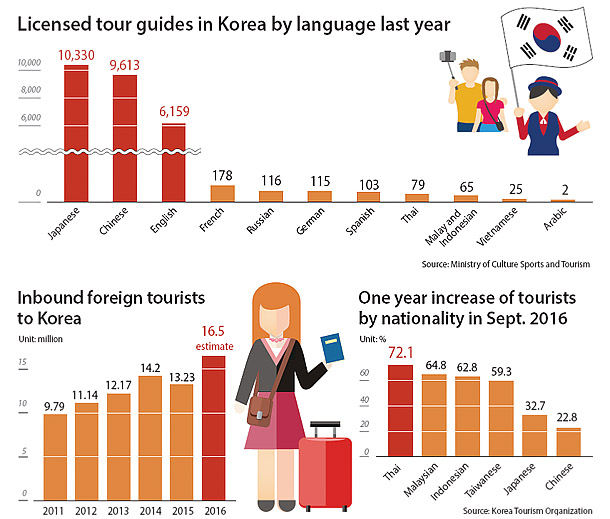 Last month, the Jeju police arrested a ring of 14 Chinese citizens who, since 2014, had submitted forged college degrees to take the tour guide exam.

The written exam consists of four subjects; history, tourism resource, tourism law, and tourism theory. Those who have tourism-related bachelor’s degree, however, are exempt from two subjects - tourism law and tourism regulation.

The Jeju police are after 16 other Chinese who have also done the same. Still, of the 30, only one obtained the license and one passed the written exam. (In order to obtain the license, one must pass the written exam, language test and an interview.)

As this case shows, the exam is hard to pass for non-Koreans.

“For foreigners, the test is as hard as the bar exam,” an insider who operates a tour agency but asked to stay anonymous, told the Korea JoongAng Daily. “Test-takers not only have to be fluent in Korean, but also have to be knowledgeable about Korean history, management and laws. That is why they are resorting to such illegal means.”

The Korean government’s regular crackdown on guides without licenses has also led to crimes.

Unlicensed guides are threatening licensed guides that report them to the government. Early this year, a Thai guide who doesn’t have a license made a Facebook posting that insinuated a request for the contract murder of a guide surnamed Yun who has a license. The Thai guide, a 47-year-old female, was caught for working without qualifications and she suspected Yun reported him. The police indicted the Thai guide after Yun reported the SNS posting.

Insiders say that such threats are nothing new as unlicensed guides and licensed guides are after the same share of the pie. Their competition got fiercer as inbound tourists declined last year and the numbers got smaller.

The Korea Tourist Guide Association’s survey last year believes that unlicensed guides in Korea amount to about 10,000. According to the Ministry of Culture, Sports and Tourism, which oversees the exam, there were 26,785 licensed tour guides as of last year.

So why do tour agencies keep using unlicensed guides?

There are two different cases, according to sources.

While a licensed guide’s daily pay is 80,000 won ($68.68), unlicensed tour guides usually get less than that. Some times they are not paid at all and they get a commission fee from the shopping that they lure tourists into.

Making profit through the tourists’ shopping is crucial for tour agencies dealing with Chinese travelers, mainly because tour packages to Korea are sold so cheaply in China. It’s the tour agencies’ only way, arguably, to make profit, sources say.

It’s a different story for tourists from Southeast Asia, though.

Tour agencies have no choice but to resort to unlicensed guides because while inbound tourists from Southeast Asia are rising, the available pool of guides is small - again due to the difficulty of the exam.

Insiders say this is why the strange custom of having a “sitting guide” emerged in the Korean tourism business. For instance, with a group of Vietnamese tourists, an unlicensed guide would lead them while having a guide with a license for a different language, say Japanese, joining them just so that if a crackdown takes place they can show them a license.

Korea’s current tourism law stipulates that a tour agency must use licensed guides but it does not specify that guides must speak the language of the group they are guiding. Korea has licenses available in 11 languages including English, Chinese, Japanese, French, German and others.

In other words, there is no regulation that can root out the custom of having sitting guides as a way to avoid getting punished for the use of unlicensed guides. Asked about this, Lee Seung-jae of the ministry’s international tourism planning division, said there are no plans to revise the tourism law to crackdown on sitting guides.

Critics say that the government must revise the current law regarding tour guides so that different tourism needs are reflected, like lowering the barrier for Southeast Asian nationals to obtain the license, as tour guides speaking those languages are so limited.

Lee of the culture ministry said that starting next year the law will be revised so that for those applying for a license for Thai, Vietnamese, Malay-Indonesian and Arabic, the minimum score for foreign language examination would be lowered from the current 625 to 600.

Insiders, however, criticize the change saying that is not lowering the barrier as it’s the exam that’s making it difficult to foster tour guides speaking those languages.

Critics suggest giving a temporary license for aspiring guides speaking Thai, Vietnamese, Malay-Indonesian and Arabic who didn’t pass the exam but have taken state-approved courses on subjects like history.

Also, given that most guides are freelancers and rarely employed by tour agencies, encouraging tour agencies to hire them as regular workers would give them a stronger sense of responsibility.

Heo Jae-jun, a senior researcher at Korea Labor Institute said, “if people work under an illegal contract, then they cannot be punished for being irresponsible.” He added that if tour agencies find it burdensome to hire guides as regular workers, they could at least give special worker status that ensures a basic social insurance package, which is the case with jobs like golf caddies and visiting teachers.