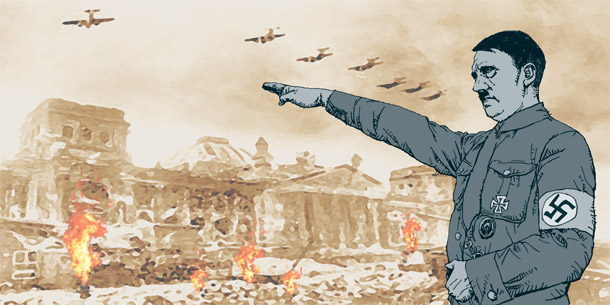 In April 1945, as Russian forces were approaching Berlin, Adolf Hitler’s aides recommended they leave the capital. Those who suggested surrender had all been removed, but there was no one left who did not expect defeat. The plan to leave Berlin was not a tactic to retreat and strike back. If the Nazi commanders stayed in Berlin, the city could not avoid the Russian Army’s concentrated fire, so they proposed minimizing casualties.

But Hitler rejected the plan and ordered them to defend Berlin. The German forces were already devastated and had to use the turrets of damaged tanks as cannons. They self-deprecatingly joked that it would take one hour to destroy the defenses, as the Russians would laugh for 55 minutes and then end the battle in five.

As expected, the Russian Army began shelling and fired more bombs in a few days than the total number dropped by the allied forces throughout World War II. The bombardment cost the lives of 22,000 civilians.

I am not the only one who sees similarities between President Park Geun-hye’s Blue House residence and Hitler’s underground bunker.

As the voices calling for her resignation rock the nation, the Blue House remains quiet. When 1.5 million candles were lit outside the residence, the lights in her office were off.

I am not sure what advice her aides have given her, but she certainly seems to have ordered them to defend the Blue House. She has made appointment announcements as if nothing has happened. She acts as if she doesn’t know her personnel choices are confusing an already chaotic nation.

Then on Tuesday, the president spoke. Since it would be her last statement, we expected she would finally come out of her underground hole. She said she has given up, but we don’t know what. She said it was her fault, but we still don’t know why. There was nothing explained except her sinister tactic to take advantage of a divided National Assembly. If she were really giving up her power, she should have started the statement not with an excuse but with an announcement of her resignation. When the French people demanded Charles de Gaulle resign, he simply said, “Je quitte!” (“I am leaving!”)

In the bunker, Hitler might have been hoping for a deus ex machina, like a character in a Greek play praying for divine intervention out of a dire crisis. But Hitler is no Greek character, and no plot device could save him from the trials of reality.

Park is also not a fictional character and should not expect a miracle. The deus ex machina that the president can hope for is the rejection of a vote on her impeachment or the Constitutional Court’s dismissal of an impeachment vote. But even if she completes her term, it would be meaningless.

The Republic of Korea is in a serious crisis. Korea’s biggest ally is the United States, and an unprecedentedly unconventional administration is about to take the White House. The economy is so sluggish that even Nobel Prize-winning economists struggle to find a solution. North Korea’s nuclear provocations are also becoming more threatening. At this critical juncture, a president with a 4 percent approval rating has practically begun a war against the people by insisting on staying in office. Hitler at least fought against his enemies.

But Park is fighting the Korean people. Just as she has said, this is not why she became president.

Hitler claimed that if he surrendered, the German people would be annihilated. But Germany exists now because it surrendered. Germany is leading Europe toward a new heyday with peace, not weapons. Hitler’s name is the only thing that disappeared. Adolf used to be a common name in Germany, but now, no one wants to name their child Adolf. Hitler is hardly an example the Korean president should follow.

There is another leader she should model after: Gen. Robert E. Lee. On April 9, 1865, the Confederate general and his Army of Northern Virginia was surrounded by the Union Army led by Gen. Ulysses S. Grant at Appomattox Court House. As Lee and his loyal deputy, Edward Porter Alexander, were resting on a log, Lee said they had to surrender. Alexander objected and proposed ordering soldiers run to the forest so that two-thirds of the forces could engage in guerrilla warfare.

But Lee shot down the proposal, saying they had to admit that the Confederacy had failed and that the only honorable and just thing to do was to surrender and accept the outcome. He said the soldiers should return home, plant crops and restore the damages of war.

General Lee was praised for his outstanding leadership during the Civil War, and by surrendering, he made the greatest contribution to peace. If he had chosen guerrilla warfare, he would have caused serious division and confusion, and the United States might not have become the kind of power it is today.

What Park is left with is the same choice that General Lee faced. It is a last remaining act of patriotism. If she does not take it, the candlelights will turn into torches. President Park deserves to burn because she has asked for it. But it is sad that the people also have to suffer.