Music videos give artist access to a bigger audience

Music videos give artist access to a bigger audience 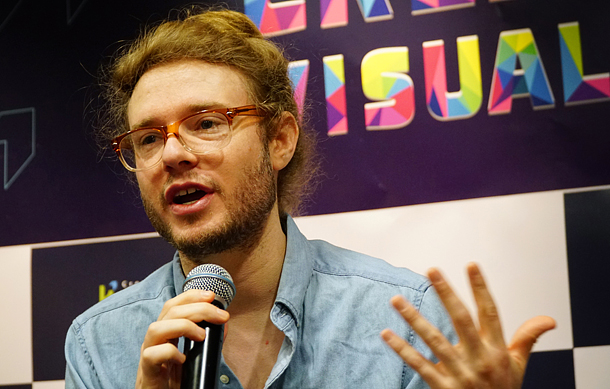 Artist Vania Heymann worked as the visual arts director for the music video of Coldplay’s “Up&Up,” which was released earlier this year. Heymann hopes to show that the world is a magical place despite its problems and boost the uplifting feeling of the song through the music video. [KOREA CREATIVE CONTENT AGENCY]

A gigantic moth clings to a construction site in the middle of the ocean, and a huge bird flies under the sea with its wings wide open. A turtle freely swims around in a dimly lit subway station, and boats float inside soup bowls placed on a dinner table. The music video for the renowned rock band Coldplay’s “Up&Up,” released earlier this year, imagines an enchanted world that keeps viewers intrigued for the entire four minutes.

Behind the unique mood of the music video is artist Vania Heymann from Israel, who worked as the visual arts director for the music video. For Heymann, this was a big chance to realize some of his inspirations that he had previously kept in the back of his head.

I cut people out of magazines and place them in the middle of space or the sea to create a surreal mood, and I thought it would be interesting to make that into a video as well. Every shot is disconnected from the other, so the video is also a collage of different shots.”

As the music video kicks off to the melody of the song, nearly 90 different scenes unfold throughout. Each shot lasts for less than five seconds, depicting unreal settings like two children walking hand in hand under a wave of fish swimming by or a monstrously big man peacefully laying down on the surface of the moon.

“The big challenge was to match the movements of different shots,” said Heymann. “It’s impossible to just take two different shots and expect them to match.

For instance, if we were to create a scene where a refugee boat rests inside a bathtub, we would first take an aerial shot of the boat floating on the sea. We take this aerial shot into a motion control camera, which is like a robotic arm that is connected to the camera, and come up with the information to match the movement with that of another scene.”

Heymann’s imagination, however, does not always get to come to fruition.

Despite some challenges, creating music videos is the most attractive form of filmmaking for Heymann.

“Music videos sit in a perfect place in filmmaking in that it is in a very free form that has a big crowd at the same time,” he said. “In movies, we go by a very specific way of telling a story.

Although they’re all different from each other, they must have this [certain] thing to have viewers watch them for several hours. Commercials in the end have to talk about the product, and video art doesn’t get to the wide public most of the time. Music videos are exactly in the middle. You have the freedom like video art does, while you still have the crowd that’s waiting to listen to the songs and see what the artists have to come up with. So it’s a perfect combination of artistic freedom and [viewership].”