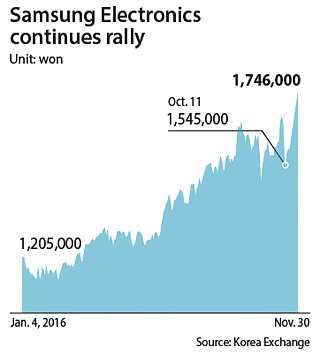 Samsung Electronics shares hit an all-time high on Wednesday after the company made a major announcement the previous day promising increased dividend payouts and exploration of a new corporate governance structure.

Tuesday’s announcement, the main contributor to the sudden boost, was the company’s response to a request made in October by American activist hedge fund Elliott Management to boost shareholder value. It suggested Samsung pay special dividends and split into a holding and operating company to more accurately reflect its market value in stock prices.

“It’s likely that the increase will continue in the long run as the company has multiple positive indicators: next year’s profits are expected to increase, Samsung recently acquired Harman and the company may possibly change its governance structure,” said Lee Seung-woo, an analyst at IBK Investment and Securities.

Wednesday’s closing price was the smartphone maker’s highest since Oct. 7, when it reached 1,706,000 won after releasing its third-quarter guidance report. In the third-quarter data, the company’s quarterly operating profit rose 5.55 percent year on year to 7.8 trillion won, exceeding analyst expectations. Analysts projected the performance to be weaker due to September’s Galaxy Note7 fiasco.

Instead, the crisis hit its stock price a few days later, when the company stopped production of the problematic phone on Oct. 11, causing shares to plummet nearly 10 percent to 1,545,000 won. For two months, the company was unable to recover to the 1,700,000 won level until Wednesday.