The snuggle is real: Men’s outerwear flies off sales racks

The snuggle is real: Men’s outerwear flies off sales racks 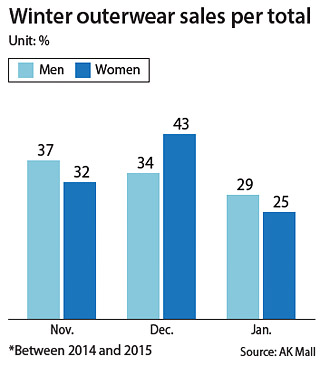 With this year’s winter turning out to be a lot colder than last year’s, men are increasingly opening their wallets to buy winter outerwear - at a much faster pace than female consumers.

Between Nov. 21 and Sunday, when the temperature first went below zero, sales of men’s winter outerwear at the e-commerce site AK Mall skyrocketed 80 percent over the previous week. During the same period, sales of women’s outerwear rose by a smaller 29 percent.

“Our analysis is that men tend to buy items once they feel the necessity to use them, while women’s spending on winter outerwear is more steady and less influenced by the immediate weather as they buy items in advance,” said a spokesman for AK Mall.

Previous sales records also show that men tend to react more immediately to the weather in terms of consumption. In 2014 and 2015, the proportion of sales for women’s outwear per total at AK Mall showed a gradual decrease during the winter, rising 37 percent in November, 34 percent in December and 29 percent in January.

This implies that women buy more outwear early in the season, before the cold reaches its peak in December. However, the highest month for men’s purchases was December when winter outerwear sales per total were 43 percent. In November, the figure was 32 percent and in January 25 percent.

When the cold wave arrived unusually late this year in January, outerwear sales for men rose 36 percent year on year while for women the increase rate was 1 percent.

Men’s purchases focused mainly on coats such as padded jackets, leather and sheepskin shearling coats while women bought a wider variety of outwear, including mufflers and boots.

Shopping website Auction released similar results, which showed that sales for men’s winter wear posted an increase steeper than that of women this year. Between Oct. 28 and Nov. 27, the year on year increase for padded jackets was 58 percent for men and 34 percent for women. On leather outerwear, the difference was even bigger: men at 657 percent and women at 72 percent.