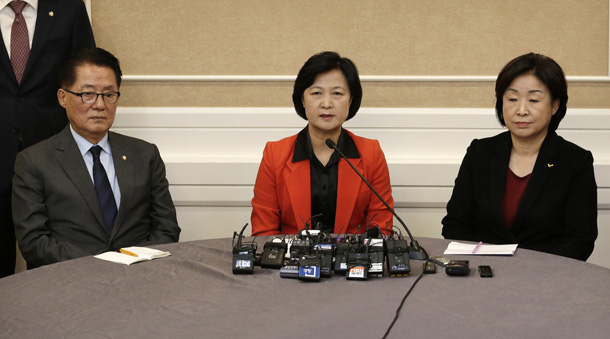 Three opposition parties agreed Wednesday to redouble their efforts to impeach President Park Geun-hye, rejecting her proposal that they negotiate with the ruling party her “orderly” departure from office.

Chairwoman Choo Mi-ae of the main opposition Minjoo Party of Korea, Rep. Park Jie-won, acting head of the People’s Party, and Chairwoman Sim Sang-jeung of the Justice Party met in the morning to discuss their response to Park’s proposition. On Tuesday, the embattled president asked the National Assembly to decide the fate of her presidency in response to a public clamor for her resignation in the wake of an abuse of power and corruption scandal.

“The ruling and opposition party politicians should discuss and create a plan to minimize chaos and the vacuum in state affairs and hand over the administration with stability,” Park said in her third statement to the country. “I will step down based on that timeline and lawful procedures.”

The opposition leaders rejected negotiations to curtail Park’s term, pressing her to step down immediately and unconditionally. They also agreed to push forward a plan to impeach her and urged the ruling Saenuri Party lawmakers to join them.

The ruling party is split between Park loyalists and representatives who want her out.

Although the opposition parties still want to vote on an impeachment motion at a plenary session on Friday, they left open the possibility of delaying the vote to Dec. 9 in order to recruit enough Saenuri dissidents to pass the motion. “It can be Dec. 2 and it can also be Dec. 9,” said Rep. Park.

The opposition parties said they are willing to discuss an early exit for Park – but only after the passage of the impeachment. Following impeachment, the Constitutional Court has 180 days to rule if the president should be removed or not.

Of the 300-member National Assembly, the three opposition parties and liberal independents occupy 172 seats as of Tuesday. At least 200 votes are required to pass the impeachment.

Saenuri lawmakers who supported the impeachment were briefly shaken by Park’s Tuesday proposal, but they realigned their position on Wednesday. They said Dec. 9 would be the deadline for the impeachment, urging Park to make public a timeline for her voluntary resignation in order to avoid such a humiliating end of her presidency.

“If Park clearly makes public a timeline for her to step down by the end of April next year, the impeachment vote may not take place,” said Rep. Hwang Young-cheul, a spokesman of a group of non-Park loyalists in the party.

If she doesn’t, the Saenuri dissidents said they will support the impeachment on Dec. 9. “We will make sure there will be no difficulty in passing the impeachment motion [if the voting has to take place],” said Hwang. “We have the numbers to pass it.”

Before Park made her statement Tuesday, 20 elder statesmen recommended that she step down by April. A group of die-hard Park loyalists, including Rep. Suh Chung-won, made the same proposal to Park on Monday, calling it a plan for an “orderly resignation with dignity.”

The possibility of Park’s resignation in April and holding a presidential election in June was again mentioned by the Park loyalists.

“If an impeachment is passed, the National Assembly won’t be able to present a clear political calendar to the people, while everyone will just look to the Constitutional Court and state affairs will remain paralyzed,” Rep. Chung Jin-suk, floor leader of the Saenuri Party, said.

“The elder statesmen’s recommendation of resignation in April and presidential election in June can be a standard.”

Chung also made clear that there will be no constitutional amendment to shorten Park’s presidency. “It’s not something to be linked to the president’s exit,” said Chung, dismissing the opposition parties’ concerns that Park’s proposition was intended to create a rift in the alliance moving toward an impeachment. Some people thought Park was hinting that a constitutional amendment to introduce a new governing system – and shorten the current president’s term – could be passed under the “orderly exit” scenario, and that would make the opposition think twice about impeachment.

Presidential spokesman Jung Youn-kuk said Wednesday that the president will accept any decision of the National Assembly. “She will accept a deal agreed to by the ruling and opposition parties,” he said.

The opposition parties are still adamant that an April resignation is not acceptable. “It doesn’t matter if the ruling party fixes the resignation date or Park confirms her resignation date,” Rep. Woo Sang-ho of the Minjoo Party. “We will impeach her by Dec. 9, regardless of their moves.”