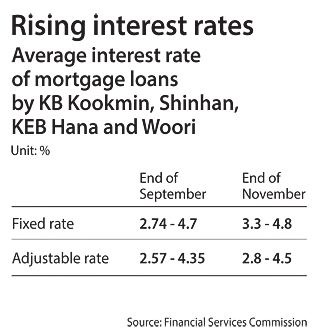 In an effort to ease rising interest rates, the country’s financial regulator on Thursday raised the possibility of issuing a fund aimed at stabilizing the bond market.

Yim Jong-yong, head of the Financial Services Commission, said the fund will be put to use in case interest rates on government bonds and loans continue to rise.

“We will re-execute the bond market stabilization fund if the interest rise triggers further market volatility,” Yim said on Thursday during a monthly press briefing at the Central Government Complex in central Seoul.

The special fund will purchase bonds from companies and banks in an effort to push down rates. The Financial Services Commission made a similar move back in 2008 to stabilize the local market by purchasing 10 trillion won ($8.5 billion) in bonds from 91 banks, securities companies and insurers participating as institutional investors.

“The size will be above 10 trillion won, if needed,” Yim said.

Yim noted that the yield on bonds has recently been on the rise as the country’s interest rates tend to be tied with those in the United States.

The surprise election victory of Donald Trump triggered a global bond rout as investors ditched bonds on expectations that the president-elect’s proposed infrastructure spending and tax cuts will result in higher inflation and higher amounts of U.S. government debt.

The move ended up raising the interest rates of Treasury bonds, which also led to a rate increase in Korea.

The adjustable rate was between 2.57 percent and 4.35 percent as of the end of September but rose to between 2.8 and 4.5 percent at the end of November, according to the Financial Services Commission.

Yim said the rise can also be attributed to an anticipated interest rate hike by the U.S. Federal Reserve this month, as financial companies are trying to factor in the possible move.

Yim’s comment is the latest in a string of government’s efforts to reduce the effect of rising interest rates.

As the rising interest rate could place additional pressure on debtors, the Financial Services Commission said that it would strengthen support measures for them.

As of the third quarter, household debt including on credit card purchases has reached a new record of 1,295 trillion won, just under 1,300 trillion won.

The pressure of rising interest rates has further been exacerbated with the U.S. Fed expected to raise its interest rate later this month.

The regulator will expand its range of state-backed loan products with mid-range interest rates and allow for postponement of interest payments if borrowers are unemployed.