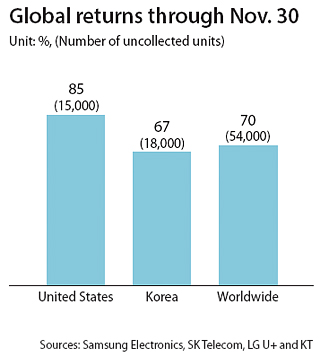 Although Samsung Electronics’ period to receive financial benefits for customers who exchanged their Note7s for other models ended Wednesday, a third of buyers are holding on to their smartphones.

When the company halted production in October and issued a voluntary recall, it promised 100,000 won ($85.58) in mobile coupons and discounts on communications costs to consumers who exchanged their Note7 for other Samsung smartphone models until Nov. 30.

The percentage of Korean users who returned or exchanged their Note7 for other models through Wednesday was 67 percent, according to statistics from Samsung Electronics. The remaining 33 percent, or 181,500 customers among the total of 550,000, held on to their phones.

However, the return rate is expected to grow. The company expects that 83 percent of consumers will return their Note7s, including those who requested extensions. Last week, Samsung Electronics said that it will allow customers to delay their exchanges until Dec. 31 if they requested an extension online by the November expiration date.

The global return rate for the Note7 stands at approximately 70 percent. Returns are higher in the U.S. at 85 percent, but 540,000 of the 1.8 million units sold globally are still in the hands of consumers.

The official due date for Note7 refunds or exchanges suggested by the company is Dec. 31. However, the industry forecast that most returns would be completed by Nov. 30, when the company ensured benefits.

Industry insiders say there are two reasons returns are not catching up with expectations: First, the current premium smartphone market is short of alternatives, as the performance of Apple’s iPhone7 wasn’t as impressive as previous models. Secondly, some users like their Note7 and don’t want to exchange it for an older model.

The iPhone7, which excited customers for a few weeks after Apple unveiled it in September, is now selling a little more than 10,000 units per day. This is a steep drop compared to its initial sales of 200,000 units in the first four days.

“It’s not easy for users familiar with the Android operating system to suddenly shift over to iPhones; moreover, the postponed release of the iPhone7’s earbuds, one of its most prominent features, seems to be hindering the model’s attractiveness in general,” said a mobile-shop employee in Yangjae-dong, southern Seoul. “The Huawei P9 recently emerged in the market, but it won’t be easy for the brand to be suddenly perceived as premium among Korean consumers.”

Some say that the 100,000 won benefit wouldn’t have been a huge advantage for the early-bird customers who purchased the 1 million won Galaxy Note7. It took two weeks after the Galaxy Note7’s release for Samsung to officially confirm that product’s technical flaws.

“Office workers like myself simply don’t have the time to go back and forth to a mobile shop to buy a new phone or move all the contacts and photos from one to another,” said a customer who bought the Note7 via presale in September. “I used it until now with no big problems, so I don’t really feel the necessity to move over to an outdated model.”

Refunds or exchanges for Note7 will expire this month. As production has ended, there are no parts for repairs. There will no longer be software updates, another inconvenience. In October, Samsung Electronics included a function in Note7’s software update that limits battery charging up to a maximum of 60 percent capacity.

However, ways to undo the battery charge limit by reversing the update or changing the settings have already been circulating in several online communities.

“Forcefully enlarging the charge limit is a very dangerous thing to do and if consumers do not return their Note7s by this year, it will be harder to receive support from the company afterwards,” said a Samsung Electronics spokesman. “We will continue upmost efforts to collect the Galaxy Note7 in the market as much as possible by this year’s end.”