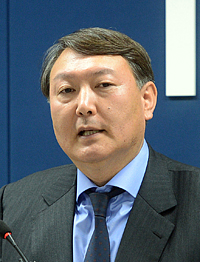 Park, who was named counsel by the president a day before, asked the Justice Ministry to dispatch Yoon Seok-youl, a senior prosecutor at the Daejeon High Prosecutors’ Office, to his team.

Yoon earned public fame when he led a special investigation into the National Intelligence Service’s meddling in the 2012 presidential election in favor of candidate Park Geun-hye.

During a hearing at the National Assembly in November 2013, Yoon said he was pressured by superiors to cut short the investigation for political reasons as it involved the president. The scene of Yoon directly confronting his superior before cameras was unprecedented.

The opposition and critics of the Park government hailed Yoon for pursuing the facts unshaken by political pressure.

Yoon’s current position in the Daejeon High Prosecutors’ Office was seen as a demotion.

“I requested the Justice Ministry and the prosecution to dispatch Yoon as a chief prosecutor,” said the 64-year-old counsel, whose last stint at the elite investigative body was head of the Seoul High Prosecutors’ Office before becoming a private lawyer.

Park, who is known for putting a number of conglomerate CEOs behind bars for business misdealing, said the burden to get to the bottom of the grave case keeps him awake at night.

“I covered many difficult legal cases before but never before have I felt this much burden. I couldn’t sleep last night,” Park told reporters.

Park expressed his intention to begin the investigation as soon as possible, saying he would not spend the next 20 days just preparing the probe. Under the law, he has 20 days to prepare and 70 days to investigate before deciding whether or not President Park committed a crime and should be prosecuted. Park can extend the probe by 30 days, which needs to be approved by the president.

President Park is likely to be questioned face to face by Park’s team, which will be the first time ever for a sitting president.