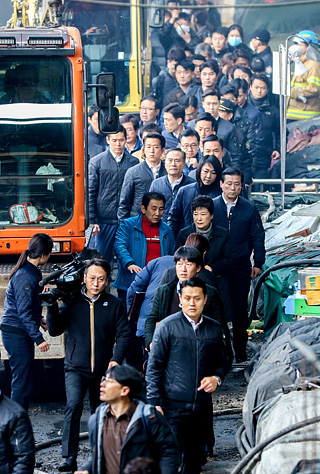 Surrounded by bodyguards, President Park Geun-hye makes a visit Thursday to Seomun Market, the largest traditional street market in Daegu, which was damaged by a fire on Wednesday. [GONG JEONG-SIK]

President Park Geun-hye on Thursday afternoon visited the fire-torn Seomun Market in Daegu, making her first official excursion out of the Blue House in more than a month since the Choi Soon-sil scandal broke.

“President Park said she is very sorry for what happened, because the Seomun Market merchants always gave her strength whenever she faced hardships,” said presidential spokesman Jung Youn-kuk. “She deliberated a while on whether or not to visit the market at such a time, but decided it was the right thing to do, to at least pay a visit to the merchants given their deep suffering.”

But she left hurriedly without interacting with the merchants.

Seomun Market, the largest traditional street market in Daegu, Park’s hometown, was swept by a major fire that broke out early Wednesday morning. Building 4 of the market, home to 679 fabric stores, was completely ravaged. Authorities have yet to determine the cause of the disaster.

Park arrived at the market around 1:30 p.m. and got out of her car some 10 meters (32 foot) from Building 4. Accompanied by bodyguards, she walked around the building for some 15 minutes with Kim Young-oh, president of an association of Seomun Market merchants.

Park’s previous visits to the market were marked by up-close-and-personal interactions with the merchants, who were generally warm-hearted toward the president, whom they consider a local.

But things have changed since the Choi-gate scandal. Park’s close friend Choi Soon-sil and two former presidential aides were indicted Nov. 20 on a range of charges, including coercion of money from big companies and misappropriation of the funds. Prosecutors called Park, who faces parallel independent counsel and legislative probes, a “co-conspirator” in most of the alleged crimes. Opposition parties are preparing to impeach Park, and hundreds of thousands of people, including many from Daegu, have rallied in the streets every Saturday night calling for Park to resign.

Park left the market without meeting any merchants affected by the fire.

“Park told me that her heart breaks over the disaster,” said Kim Young-oh, the merchant association’s head, “and asked me what the merchants need the most now. So I gave her a note detailing their needs and requests.”

“Who is she to come here at such a time as this?” said one merchant.

At this, a man in his 60s standing next to the merchant shouted, “Who are you to say something against the president?”

The argument snowballed into a dispute involving some 10 people, with one group speaking for the president and the other railing against her.

“I don’t think it is right that Park came and went without speaking with the merchants,” said Jung Sung-boon, a 68-year-old merchant whose store was in the fire-ravaged Building 4. “She came yet none of us heard from her.”

“The fire and the Choi scandal are two different events,” said Kwon Yeong-soo, a traffic volunteer at the market who is a member of the Marine Corps Veterans Association. “I am thankful for the fact that the president paid a visit to the disaster site.”

Park’s visit to the market was her first official excursion from the Blue House in 35 days, since she participated at an event in Busan on Oct. 27.

Authorities are still investigating the exact cause of the fire. Police found through CCTV camera footage that the fire began on the first floor of Building 4 at 2:07 a.m. on Wednesday. It was put out after many hours of firefighting through Thursday. Two firefighters were injured and no deaths were reported.