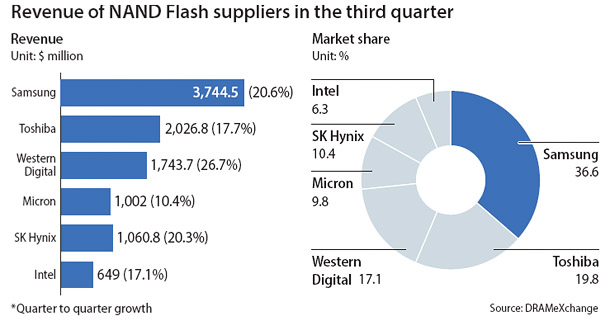 Samsung Electronics widened the gap between itself and Toshiba in the NAND flash memory chip market to its biggest on record.

NAND flash memory chips are widely used for mobile devices, as data is secured even when power is turned off, and are also used in solid-state drives for laptops.

Samsung had $3.744 billion in revenue in the global NAND flash market during the third quarter, securing 36.6 percent market share, according to DRAMeXchange, a global provider of market data on major electronics components.

Japan’s Toshiba, ranked second in the market, had sales of $2.026 billion and a 19.8 percent market share.

While Toshiba seemed to be closing in again, narrowing the gap to nearly 10 percentage points in the first quarter of this year, the gaps grew again as market demand for memory chips recovered in the second quarter and demand for Samsung chips increased.

Samsung’s bullish performance is largely due to its technology to mass produce 3D Vertical-NAND chips, an advanced flash memory chip with high density. Samsung was the first mover in the market and until the first half of the year Samsung was the only producer of the multilayered high-density memory chip.

“Samsung retained its first-place position in the quarterly revenue ranking as the company benefited from strong demand from Chinese smartphone brands,” DRAMeXchange reported. “Samsung’s revenue outlook for this fourth quarter is expected to be even better than the third.”

The third player in the market was Western Digital, which acquired SanDisk in May of this year. It ramped up revenue 26.7 percent compared to the previous quarter and took a 17.1 percent market share. Korea’s SK Hynix stepped up to the fourth rank edging out Micron, with 10.4 percent market share.

SK Hynix posted a 20.3 percent increase in revenue, as the average price for NAND flash rose about 7 percent and it expanded shipments by 12 percent.