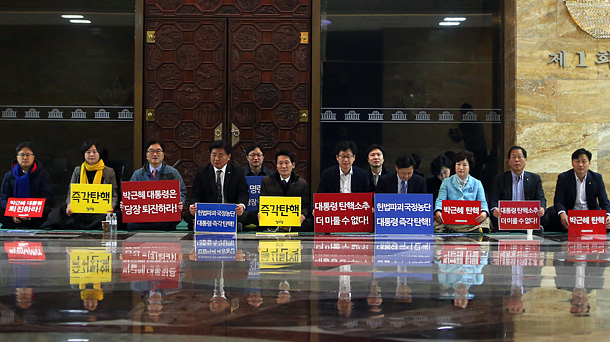 Opposition lawmakers protest outside the main conference hall of the National Assembly on Friday to demand impeachment for President Park Geun-hye. [PARK JONG-KEUN]

The three opposition parties in the legislature agreed Friday to vote on an impeachment motion on Dec. 9 to oust President Park Geun-hye from office, pledging to concentrate their efforts on impeachment and persuading ruling party lawmakers to join their cause.

During a meeting on Friday, the floor leaders of the Minjoo Party, People’s Party and Justice Party reached a consensus to propose an impeachment motion so that the National Assembly can put the motion to a vote next Friday. The opposition made clear there would be no negotiation on President Park voluntarily ending her term early and that they would push for the impeachment vote no matter what happens in the coming days.

“Even if the president declares she will resign in April next year, we will not be shaken in our endeavor for impeachment,” the three parties said.

Under the trilateral agreement, the three parties would propose a motion during a meeting Friday evening, which had not concluded as of press time. The parties will then present the motion to the full legislature on Dec. 8. According to a law governing presidential impeachment, the motion has to be voted on 24 to 72 hours after its presentation to the legislature.

The joint agreement came after a rift emerged on Thursday over whether or not to go for an impeachment vote on Dec. 2 as initially scheduled. While the Minjoo Party and Justice Party insisted on a Dec. 2 vote, the Peoples’ Party objected, citing a shift in sentiment among Saenuri Party lawmakers who are not loyal to Park and had previously been intent on voting in favor of impeachment.

The change in stance among Park’s adversaries in the ruling party was detected Thursday when the party’s former chairman, Kim Moo-sung, himself a Park adversary with significant sway in the group, said he would not vote for impeachment if the president declared she would resign in April. The ruling party unanimously agreed Friday that Park should resign by April 30, after which the country’s constitution requires a presidential election be held within 60 days.

Sensing a change in mood among Saenuri Party lawmakers who had previously expressed their intent to vote for impeachment, the Peoples’ Party objected to putting the motion to a vote, arguing that there was no longer enough muster to get it passed.

The People’s Party, which has 38 lawmakers and is currently being led by acting Chairman Park Jie-won, was heavily criticized by the public and faced a flood of angry calls to its headquarters for back-peddling on the Dec. 2 vote. Taken aback by the angry reaction, the party then presented a mediated proposal to hold a vote on Monday instead of Friday. But it had to drop its proposal again after the Saenuri Party objected to arranging an extra Monday voting session.

Meanwhile, on Friday, Park’s adversaries in the Saenuri Party demanded the president give a timeline for her resignation by 6 p.m. on Wednesday, threatening to cast “yes” votes for an impeachment next Friday unless the president guarantees her exit from office. They maintain that they will not take part in the vote if President Park affirms by the Wednesday deadline that she will voluntarily withdraw herself from state affairs right away and step down on April 30.

In the case that she does not, the group of lawmakers warned that they would follow through on impeachment with the opposition bloc, which would all but assure the 200 votes needed in the 300-member legislature for impeachment.

But even among the 30 or so Park adversaries, there appeared to be some division about the fateful vote next Friday. It is possible that even if President Park presents a timeline for her resignation before the Wednesday deadline, Park adversaries in the Saenuri Party could decide to support the impeachment motion if the April timeline is not endorsed by the opposition as well.

“There are conflicting opinions among a group of Park adversaries [in the Saenuri Party] on whether to take part in the vote if the ruling and opposition camps fail to reach an agreement [on Park’s April resignation], even if the president promises to step down,” said Rep. Yoo Seong-min, who has been cited as a possible presidential contender in the Saenuri Party.

The condition set by Park’s adversaries that they would vote for impeachment unless she promises to step down by Wednesday is also subject to change with public sentiment. If a large number of people take to the streets for a sixth mass rally today, it will put further pressure on lawmakers to take part in the Friday impeachment vote even if President Park agrees to their terms. Last Saturday’s protests drew 1.9 million people nationwide.

For the opposition to pass an impeachment motion, 28 votes from the Saenuri Party are needed as 172 votes from liberal lawmakers are thought to be guaranteed. Once the motion passes the legislature, the prime minister will immediately take over as acting president, and the final decision on impeachment gets tossed to the Constitutional Court, which has 180 days to deliberate on the act’s legality. Approval from six out of nine court judges will be required.

In an impeachment motion drafted by the opposition coalition, President Park is accused of far-reaching legal violations ranging from bribery, abuse of power and coercion to leaks of classified information and disregard for the constitution. She is also accused of failing to properly respond to the sinking of the Sewol ferry in April 2014, when 304 passengers died after a delayed government response. The motion said she had violated Article 10 of the Constitution, which the motion says mandates her to protect the lives of citizens.

As politicians debate how to cut short President Park’s term, her approval rating has remained at an all-time low of 4 percent for two weeks, according to Gallup Korea. The poll was conducted from Tuesday to Thursday, after the president issued a third public apology.