Trump and the new economic order

Trump and the new economic order 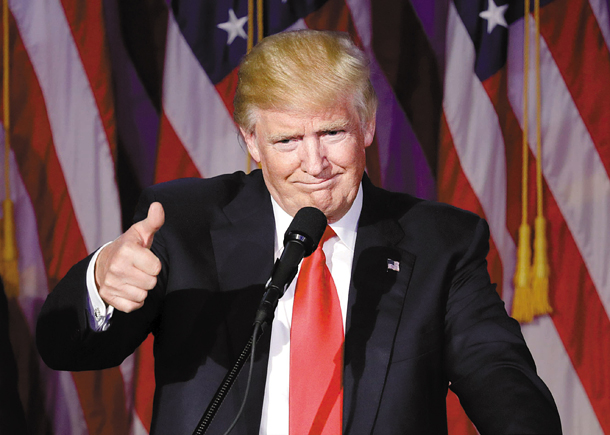 HONG KONG — Since the end of World War II, the hierarchy of economic priorities has been relatively clear. At the top was creating an open, innovative, and dynamic market-driven global economy, in which all countries can (in principle) thrive and grow. Coming in second — one might even say a distant second — was generating vigorous, sustainable, and inclusive national growth patterns. No more.

In fact, a reversal seems to be underway. Achieving strong inclusive national-level growth to revive a declining middle class, kick-start stagnant incomes, and curtail high youth unemployment is now taking precedence. Mutually beneficial international arrangements governing flows of goods, capital, technology, and people (the four key flows in the global economy) are appropriate only when they reinforce — or, at least, don’t undermine — progress on meeting the highest priority.

This reversal became apparent in June, when Britons — including those who benefit significantly from the existing open economic and financial system — voted to leave the European Union, based on what might be called the sovereignty principle. EU institutions were perceived to be undermining Britain’s capacity to boost its own economy, regulate immigration, and control its destiny.

A similar view has been animating nationalist and populist political movements across Europe, many of which believe that supra-national arrangements should come second to domestic prosperity. The EU — which actually does, in its current configuration, leave its member governments short of policy tools to meet their citizens’ evolving needs — is an easy target.

But even without such institutional arrangements, there is a sense that emphasizing international markets and linkages can hamper a country’s capacity to advance its own interests. Donald Trump’s victory in the United States’ presidential election made that abundantly clear.

In keeping with Trump’s main campaign slogan, “Make America Great Again,” it was his “America first” comments that were most revealing. While Trump might pursue mutually beneficial bilateral agreements, one can expect that they will be subordinated to domestic priorities, especially distributional aims, and supported only insofar as they are consistent with these priorities.

Developed-country voters’ frustration with the old market-driven global economic architecture is not unfounded. That order did allow powerful forces, at times beyond the control of elected officials and policymakers, to shape national economies. It may be true that some of that order’s elites chose to ignore the adverse distributional and employment-related consequences of the old order, while reaping the benefits. But it is also true that the old order, taken as sacrosanct, hampered elites’ capacity to address such problems, even if they tried.
This was not always the case. In the wake of WWII, the U.S., motivated partly by the Cold War, helped to create the old order by facilitating economic recovery in the West and, over time, creating growth opportunities for developing countries. For 30 years or so, the distributional aspects of the global growth patterns that these efforts underpinned were positive, both for individual countries and for the world as a whole. Compared with anything that came before, the post-war order was a boon for inclusiveness.

Multilateralism — long enabled by the same sort of asymmetric contribution, though typically proportionate to countries’ income and wealth — will also lose steam, as the trend toward bilateral and regional trade and investment agreements accelerates. Trump is likely to be a leading proponent of this tack; in fact, even regional trade deals may be ruled out, as his opposition to ratifying the 12-country Trans-Pacific Partnership suggests.

This creates an opportunity for China to lead the establishment of a trade pact for Asia — an opportunity that Chinese leaders are already set to seize. In conjunction with its “one belt, one road” strategy and its creation of the Asian Infrastructure Investment Bank, China’s influence in the region will expand significantly as a result.

Meanwhile, for developing countries that lack China’s economic might, the trend away from multilateralism could hurt. Whereas poor and less-developed countries found opportunities to grow and prosper under the old order, they will struggle to negotiate effectively on a bilateral basis. The hope is that the world will recognize its collective interest in keeping development pathways open for poorer countries, both for these countries’ benefit and for the sake of international peace and security.

Beyond trade, technology is another powerful global force that is likely to be treated differently in the new order, becoming subject to more national-level regulations. Cyberthreats will all but require some regulations and will demand evolving policy interventions. But other threats — for example, the fake news that has proliferated in the West (and, in particular, in the U.S. during the presidential campaign) — may also call for a more hands-on approach. And the adoption of work-displacing digital technologies may need to be paced, so that the economy’s structural adjustment can keep up.

The new emphasis on national interests clearly has costs and risks. But it may also bring important benefits. A global economic order sitting atop a crumbling foundation — in terms of democratic support and national political and social cohesion — is not stable. As long as people’s identities are mainly organized, as they are now, around citizenship in nation-states, a country-first approach may be the most effective. Like it or not, we are about to find out.


*The author, a Nobel laureate in economics, is a professor of economics at New York University’s Stern School of Business and senior fellow at the Hoover Institution.