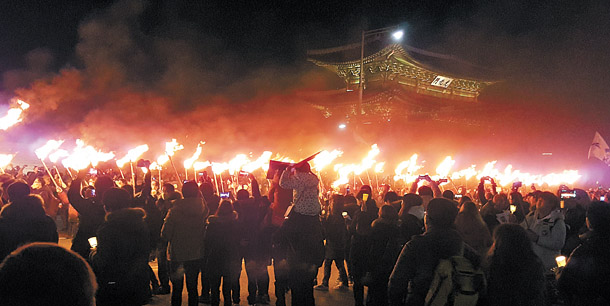 Protesters in Gwanghwamun Square, central Seoul, march toward the Blue House with torches in their hands Saturday for the sixth straight week demanding that President Park Geun-hye be impeached. [NEWSIS]

President Park Geun-hye’s statement to “surrender everything” and let the National Assembly decide her fate during a third public apology last week did nothing to diminish protests against her as 2.32 million people took to the streets nationwide on Saturday, the highest so far.

The weekly vigils, which began in Seoul on Oct. 29 and spread as far away as the southern resort island of Jeju, are calling for Park to resign or be impeached for letting her friend Choi Soon-sil pull strings from behind the scenes in state affairs, allegedly extort money from conglomerates and get hold of classified information - all without any formal role in Park’s administration.

The rally organizers, a coalition of various civic and labor groups, estimated the number of people on the streets of Gwanghwamun Square in downtown Seoul at 1.7 million, while the police put the figure at 320,000. Both estimates are the highest so far.

The protesters were allowed just 100 meters (328 feet) away from the Blue House, the closest the police have ever allowed.

For the first time, protesters also gathered outside the headquarters of the ruling Saenuri Party in Yeouido, western Seoul, to demand the party scrap its stance that Park should step down in late April 2017, and a presidential election be held in June 2017.

According to figures provided by the organizers, the rally in Yeouido began at 2 p.m. with 3,000 people participating, which rose to 20,000 people by 3 p.m., when they started marching down the streets.

Park Jin, a spokesman from the organizing coalition, said the group had initially planned to delay a protest about the Saenuri Party until President Park resigned, but decided to do so earlier after its lawmakers united to promote an “orderly resignation” of the president in April.

That stance was formally adopted by the ruling party last Thursday through a general assembly of its lawmakers, although the faction not loyal to Park has divisions in how to deal with an impeachment vote this week.

The party is trying to buy time to groom a presidential contender and hopes that public anger with the party will wane. Impeachment could have been quicker.

The three opposition parties, on the other hand, agreed last Friday to vote on an impeachment motion this coming Friday.

There are 172 liberal lawmakers in the 300-seat parliament. An impeachment requires a two-thirds vote, after which the Constitutional Court deliberates on the act’s legality for up to 180 days.

On Saturday, protesters hurled eggs at the Saenuri headquarters in Yeouido and yelled at the party to disband. Kang Sang-jae, 51, a resident of Mapo District, western Seoul, said, “The Saenuri Party should take responsibility if President Park doesn’t get impeached.”

By 4 p.m., thousands of protesters were gathered near the Hyoja-dong Community Security Center in downtown Seoul, just 100 meters away from the Blue House, chanting anti-Park slogans in unison. Bugle sounds filled the air, while others played kkwaenggwari, the traditional Korean gong.

Protesters were sure that the noise could be heard in the presidential office. But Lee Eung-yeok, 60, from Songpa District, southern Seoul, who attended the rally for the first time, said he wasn’t sure Park would budge.

“I’m not sure whether her mind will change,” said Lee. “I hope that the sounds resonate in her heart, not just her ears.”

After 6 p.m., over a million protesters convened at Gwanghwamun Square, at one point chanting that the National Assembly should “earn your keep,” and marching toward the Blue House with torches in their hands. The organizers said they focused more on pressuring parliament to impeach Park in the sixth rally, realizing she will never resign on her own.

In Gwangju, an estimated 10,000 people gathered in front of the former provincial office of South Jeolla and sang the controversial “March of the Beloved,” an anthem for democracy activists. Fueling debate over the song, North Korea used it as background music for a film in 1991.

Moon Jae-in, former chairman of the Minjoo Party, who was narrowly defeated by Park in the 2012 elections, joined the Gwangju rally and urged residents to push Saenuri Party lawmakers to vote for impeachment.

A pro-Park rally, led by her online fan club known as “Parksamo,” was organized in front of Dongdaemun Design Plaza in central Seoul the same day and attended by 30,000 people, according to figures provided by the club.