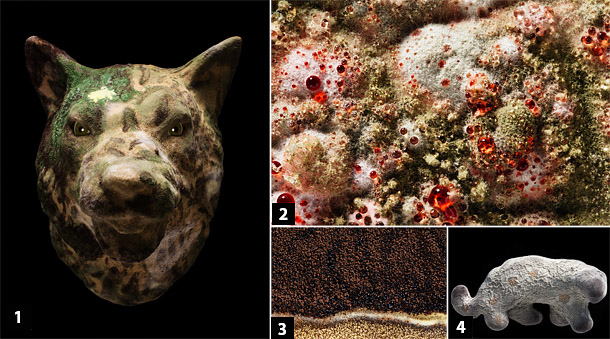 Artist Yoon Jin-young, who cultures fungi at a laboratory and then takes pictures of them, is holding a solo exhibition at Ilwoo Space. The exhibit includes: 1.“Invasive Species 001.” 2.“Fungal Apoptosis 001”3.“The Boundary 001”4.“Fungal Animalia 001”[ILWOO FOUNDATION]

Many people are disgusted by mold, as it reminds them of decay and death. But mold itself is alive, and its vitality as well as its various colors, forms and textures sometimes fascinate artists such as Yoon Jin-young.

Yoon, 47, cultures diverse fungi in a laboratory and then takes pictures of them to capture images created from a combination of the artist’s control and natural coincidence. The process can be compared to that of American abstract expressionist artist Jackson Pollock’s action paintings which create images that are found in between his conscious dribbling of paints and their random splashes.

“I use mold for my works in the way painters use paints,” Yoon said at Ilwoo Space in central Seoul last week. “I pursue scientific and artistic control but cannot avoid the incidental occurrences of nature. So fungus symbolizes some superior power, which is the motif of my work.”

At the gallery, the artist started a solo exhibition titled “Decomposer” last month, as she was designated as one of the 2016 “Photographers of the Year” by the Ilwoo Foundation under Hanjin Group earlier this year. The show, which runs through Dec. 21, exhibits about 20 pieces of her latest photos, videos and installations.

The exhibits include close-up photographs of animal sculptures covered in fungi. At first, viewers might mistake them for the dead bodies of actual animals. But, after close inspection, they find that the animals in the photos have unnaturally limpid eyes. Viewers can feel a coexistence of death and life, and the tension between the two. A video work, which gradually zooms in on a fungi-covered sculpture of an animal head with a moving human eye, maximizes the feeling.

“I had great fear of death in my youth and consciously made efforts to overcome it,” Yoon said. “As time passed, my fear of death significantly decreased, as I came to think that death is not the end. I also became less horrified with dead bodies and came to even find some beauty in them.”

Some other works show fungi culture sheets, whose diverse colors, gloss and dense clusters of forms give viewers either a feeling of grotesque beauty or disgust.

“Yoon’s works provide viewers with new experiences about life and organisms,” said photography critic Suejin Shin. “And the artist’s steady and honest explorations into the border between death and birth are accumulated in her works.”