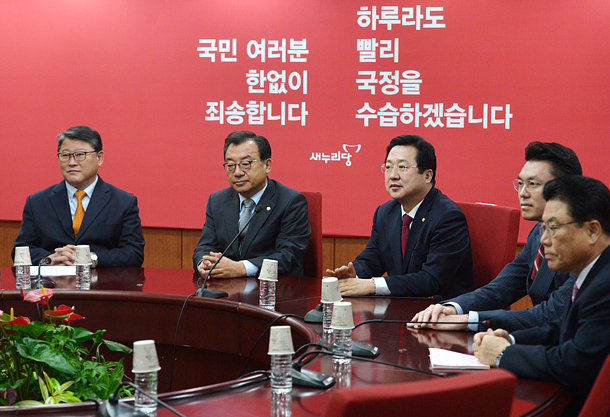 Supreme Council members of the ruling Saenuri Party meet in the party headquarters in Yeouido, western Seoul, on Monday to discuss how to respond to the impeachment motion slated for voting on Dec. 9. [NEWSIS]

A conscience vote will be allowed ruling party lawmakers Friday when the National Assembly votes on a motion to impeach President Park Geun-hye.

“All Saenuri lawmakers must attend the impeachment vote on Friday and vote based on their own conscience,” said Rep. Chung Jin-suk, floor leader of the ruling party, after meeting with party chairman Lee Jung-hyun. “Chairman Lee also agreed to the conscience vote.”

Chung said the party will hold a general assembly of lawmakers Tuesday morning to officially decide the position on whether to vote or not.

Following an abuse of power and influence-peddling scandal involving President Park’s close friend and associates, a motion to impeach Park over a series of alleged violations of the Constitution and criminal laws was sponsored by 171 opposition and independent lawmakers and submitted to the National Assembly on Saturday. A secret vote on the motion will take place Friday.

“If the impeachment voting takes place on Friday as scheduled, it is my consistent belief that all Saenuri lawmakers must attend and cast votes based on their consciences,” Chung said.

Chung also said a schism in the party has made it impossible to negotiate the Saenuri Party’s stance with the opposition parties. The ruling party previously adopted a party line that Park must resign at the end of April and a presidential election be held in June, which would likely give it more time to prepare for the election.

“Because the non-Park-loyalists of the Saenuri Party and the opposition parties are unyieldingly heading toward impeachment, we must decide our position at tomorrow’s general assembly of lawmakers,” he said.

Jolted by the largest-ever public protests across the nation on Saturday, a group of non-Park-loyalists decided Sunday to participate in Friday’s impeachment vote, retracting their earlier support for the April resignation and June presidential election. Last week, they issued an ultimatum to Park that she must make public her position by 6 p.m. on Wednesday, urging her to immediately surrender control over the government and step down on April 30, 2017.

After 2.32 million people took to the streets nationwide on Saturday, the highest in Korean history, 29 lawmakers from the group discussed the situation for more than four hours and made the decision that they will join the impeachment vote regardless of Park’s position.

The non-Park loyalists’ group, known as the Crisis Management Council, forecast that enough lawmakers will support the impeachment on Friday.

“It is my estimate that more than 40 of us will support it,” said Rep. Kim Jae-gyeong in a radio interview on Monday. Kim is in charge of the council’s general operation.

“We started collecting signatures, but suspended it because we didn’t want to box in the members too much. Based on the signatures collected so far and past discussions, it is my assessment that 40 or more of us will vote for impeachment.

“This is a matter that will decide the country’s destiny,” he said. “Because each lawmaker is an institution representing the voters, a consensus is spreading that we must respect the people’s will, even though it may differ from our individual thought. Unless there is an invisible hand controlling the situation, there will be more votes for impeachment than we expect now.”

Kim, however, said it will be a tough decision for lawmakers representing districts in Daegu, Busan and Gyeongsang provinces, the traditional political stronghold of the conservatives and the president.

“Lawmakers of the capital region are less burdened, but lawmakers from those regions, including myself, are more sensitive to the voters’ sentiments in the constituencies,” he admitted. “Many residents ask us if we have to impeach the president when she says she will resign. It is a dilemma, but we decided to respect the nation’s will.” Rep. Hwang Young-cheul, spokesman for the council, said in a radio interview that 35 lawmakers from the Saenuri Party will support impeachment. “I sent text messages to inquire their intentions and confirmed 35 votes,” he said. “More than three lawmakers from the pro-Park faction individually contacted me [to express their support].”

As the countdown began for the impeachment vote, opposition parties also concentrated their efforts to ensure the passage of the motion. The Minjoo Party of Korea decided to hold a 100-hour stretch of speeches, with its lawmakers taking turns, and daily candlelight vigils at the National Assembly.

The opposition parties also warned that President Park may try another way to turn around the situation, such as a press conference or another public message.

Park made a series of public statements to address the influence-peddling scandal threatening her presidency. The third and latest was issued on Nov. 29. Park said she wanted the ruling and opposition parties to decide her fate, including a plan to shorten her presidential term.

That statement persuaded the non-Park-loyalists to change their initial support for impeachment, but they quickly reversed their position after more than 2 million protesters attended Saturday’s rallies.

Speculation is growing that Park may issue another statement this week before the impeachment vote, but the Blue House remains silent as of Monday afternoon.