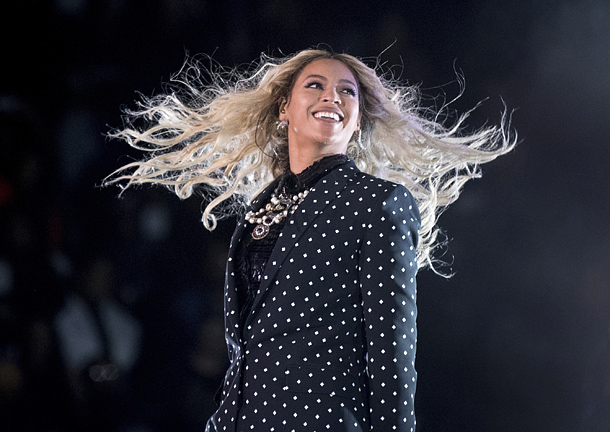 Beyonce performs at a Get Out the Vote concert for Democratic presidential candidate Hillary Clinton on Nov. 4 in Cleveland. The pop star is the leader of the 2017 Grammys with nine nominations, including bids for album of the year with “Lemonade,” and song and record of the year with “Formation.” [AP/NEWSIS]

NEW YORK - A look at interesting factoids during the Grammy nominations, announced Tuesday:

Beyonce is a rock star

The Grammys are basically the battle of Beyonce and Adele: In four of her five nominations, Adele will go toe-to-toe with Queen Bey. Hello!

Though Beyonce earned a whopping nine nominations, it’s a surprise her name didn’t pop up in the best R&B song and R&B performance categories, which she has dominated in the past. Speaking of R&B, Solange’s epic “A Seat at the Table” was surprisingly snubbed in the best urban contemporary album category, as was Bryson Tiller’s “Trapsoul” and Chris Brown’s “Royalty,” which didn’t earn the singer a single nod. Instead, nominations went to lesser known acts like Gallant and KING.

Fantasia and Maxwell earned nominations for their singles, but didn’t make the best R&B album cut, losing to Mya and a live Lalah Hathaway album.

And while Drake has eight nominations, how could his No. 1 hit “One Dance” not earn one nomination? Other snubs include Shawn Mendes, who was a shoo-in for best new artist, and Coldplay, who only earned one nomination for best music video and was shut out of the rock honors.

Bruno Mars just released a new album - too late for the 2017 nominations - so he’ll likely dominate the 2018 Grammys. But thanks to co-producing “All I Ask” for Adele, he’s nominated for album of the year (it appears on her best-seller “25”). OneRepublic frontman Ryan Tedder also produced a track on “25,” earning him a nomination.

Beyonce’s album of the year nomination also gives nominations to producers and featured guests like the Weeknd, Jack White, Kendrick Lamar, Mike Will Made-It and James Blake. Skrillex, Scooter Braun, Kanye West and Rihanna earned album of the year nods thanks to Bieber’s and Drake’s albums.

Diplo, who produced on Bieber and Beyonce’s albums, will battle himself for album of the year.

More and more, performers submit live performances of older songs and earn Grammy nominations. Kelly Clarkson, who sang her emotional “Piece by Piece” on “American Idol” and burst into tears during the performance, is nominated for that version of the song for best pop solo performance. The song became a Top 10 hit after Clarkson’s “Idol” performance.

Alabama Shakes, who won three Grammys earlier this year, is nominated for a live version of “Joe” from Austin City Limits in the best rock performance category. Disturbed is also nominated in the same category for a live performance of Simon & Garfunkel’s “The Sound of Silence” from a March appearance on “Late Night with Conan O’Brien.”

It’s the first Grammy nomination for a performance on a late-night show and is the most-watched “Conan” musical performance of all time, with close to 40 million views.

Adele and Pharrell are a few of the acts who have won Grammys for live versions of their hit songs.

David Bowie died in January, but near the one-year anniversary of his death, he could win Grammy gold. “Blackstar,” his final album, earned four nominations. Joey Feek, of the duo Joey + Rory, also died of cancer this year. The group is nominated for best gospel roots album for “Hymns.”

First time around the block

A number of acts who have released multiple albums are finally earning their first Grammy nomination, including Demi Lovato, Solange, Blink-182, Twenty One Pilots, Chance the Rapper, Baroness, Mike Posner, Gojira and Periphery.

Popping into the country category

Best country duo/group performance is being invaded by pop singers. Pink is nominated for her song with Kenny Chesney; Elle King is competing with her collaboration with Dierks Bentley; and a cappella group Pentatonix share a nomination for a song with Dolly Parton.

Being your own worst enemy

Chance the Rapper has seven nominations, but he will compete with himself for best rap song, where he is nominated three times. And Kanye West is nominated twice in three different rap categories AP