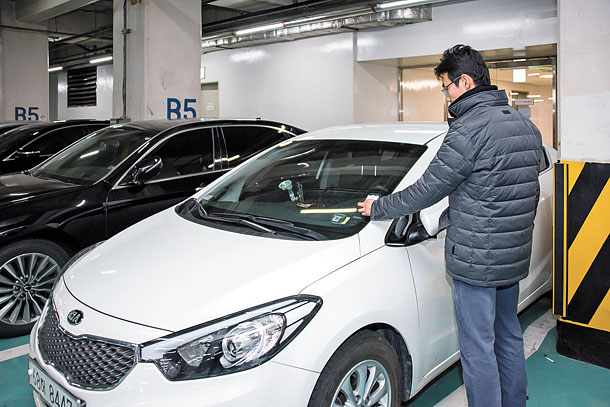 SK Rent-A-Car launches a corporate car-sharing service this month. The service enables company employees to borrow a car leased by the company. [SK-RENT-A-CAR]

Park Seong-woo, a researcher at a securities firm, sees his company’s corporate cars, leased on three- to four-year contracts, frequently sitting in the parking lot.

“A lot of corporate cars that belong to senior officials are from premium brands,” he added. “It would be nice if employees can use such cars when they’re available.”

SK Rent-A-Car plans to do just that: The company will launch a corporate car-sharing service this month that enables employees to borrow cars leased by the company. “We already went through a trial period for the service in our company and received positive reactions so we decided to open it to corporate clients who want to implement it as well,” said a spokesman for SK Rent-A-Car.

In the original system of car-sharing, users borrow and return vehicles that are placed in public garages after paying a fee that differs according to rental time and car type. While car-sharing is a direct transaction between the company and a driver, SK’s new service for corporate cars is “re-sharing” among employees what has been already borrowed by the company. 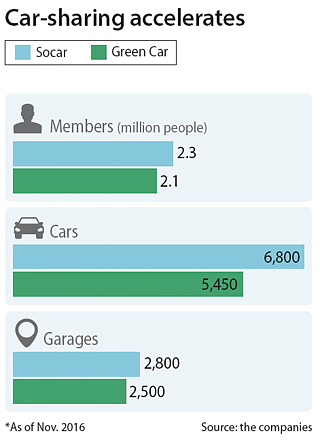 For the latter, employees will retrieve corporate cars from company parking lots instead of public garages. A smartphone application will offer information on which cars are available and about reservations. Corporate cars that are off-duty will be open for sharing, such as during commuting hours and weekends.

This is only one of the transformations car-sharing is undergoing in Korea, five years after its first appearance.

Socar and Green Car, the market’s top companies, launched in 2011. They currently operate 6,800 and 5,450 vehicles each. While they started out mainly providing small and midsize cars, electric and luxury sedans are making way into the inventory. BMW’s 520D and X3 are among Socar’s list of most borrowed cars. Next year, it plans to add electric-car brand Tesla’s Model S. Likewise, Green Car operates BMW’s 118d and Ford’s Mustang. The company also has 68 Ioniq Electric and five Chevrolet Bolts, both electric cars, running in Jeju Island and Seoul.

To resolve the issue of inconvenience regarding returns, car-sharing companies are expanding service for one-way drives. In the past, customers had to return the borrowed car to where they picked it up, making one-way trips impossible.

Socar started one-way trips in September 2015 and is enabling the service on limited routes in major cities such as Busan, Daegu, Ulsan and Seoul’s metropolitan areas, including Incheon and Gyeonggi, as well as Jeju Island. Green Car is operating a similar service that allows users to return vehicles to any public garages, as well as a “free-zone” where users can return their cars anywhere parking is allowed.

There are also signs of showing that the originally passive service, which awaits customers to use it, is turning more proactive. In June, Socar started a door-to-door service, which allows drivers to receive and return cars anywhere that’s convenient. “We launched ‘door-to-door’ in consideration of customers who are far from public garages, those who are holding big luggage or have difficulty in walking,” said a Socar spokesman.

The concept of car-sharing started in southern Europe and the United States. The U.S. market research company Navigant Research predicted that the global car-sharing market will reach 12 million users by 2020.