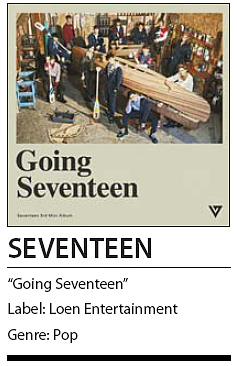 This K-pop act with its thirteen members is back with its latest eight-track record. In an over-saturated sea of idol singers, rookie groups are finding it increasingly difficult to remain relevant in the mainstream, especially as increased competition leads to lackluster chart performances for groups like Seventeen. Though their lead single “Boom Boom” isn’t exactly a breath of fresh air, its funky rhythm section and catchy chorus is a fine combination worth a listen, but lacks a punch of originality to truly propel the single to the top of the charts.

Likewise, the remaining seven songs offer a variety of pop music trends that overtook airwaves over the past few years. “Highlight” is an especially catchy song which utilizes an instrumental breakdown reminiscent of hip-hop tracks, yet manages to pull it off naturally while retaining its original rhythm. Until their agency can learn to utilize the musical quirks of their thirteen members or define a concrete musical direction, this idol act may not see the spotlight it deserves.