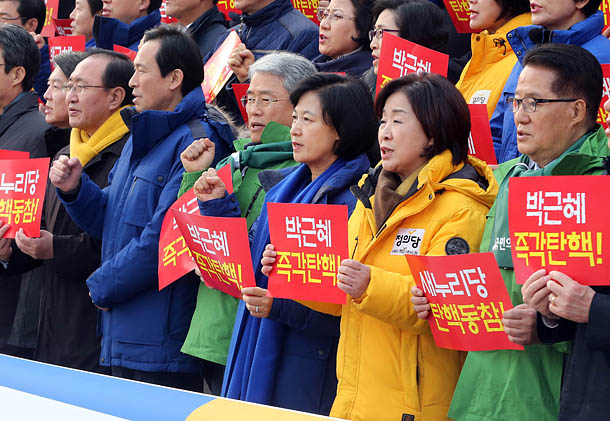 Leaders of three opposition parties stage a rally on the stairs to the main building of the National Assembly on Wednesday to urge lawmakers to vote for the motion to impeach President Park Geun-hye. [KANG JUNG-HYUN]

President Park Geun-hye’s mysterious absence during the Sewol ferry’s sinking in 2014 became a central issue in the impeachment vote on Friday.

A group of ruling party lawmakers asked opposition parties Wednesday to delete that issue from the motion to impeach Park in order to increase the chance of passing the motion by convincing as many lawmakers as possible.

The Saenuri representatives who don’t belong to the pro-Park faction of the party said her mysterious paralysis for seven hours during the Sewol’s sinking on April 16, 2014 should not be part of the impeachment motion.

Rep. Hwang Young-cheul, spokesman of a group known as the crisis management council, said its members are divided over the legitimacy of citing the Sewol ferry issue as a ground for impeachment. “If passing the impeachment is the upmost goal that we must accomplish in respect to the people’s will, we request the opposition parties seriously consider this issue,” he said.

He said he informed the three opposition parties to consider the request and include only issues addressed by the prosecution. “This is not an official request,” he added. “We just want them to do their best. This is not a mandatory condition for us to join the impeachment.”

The prosecution indicted Park’s longtime friend Choi Soon-sil and former presidential aides as primary suspects in a massive corruption scandal. It labeled Park a co-conspirator, although it could not prosecute her because the president has immunity from a criminal prosecution.

Based on those indictments, the three opposition parties created a joint motion to impeach the president. The Minjoo Party of Korea, the People’s Party and the Justice Party laid out a wide range of alleged constitutional and criminal violations committed by Park as the grounds for impeachment.

The motion, sponsored by opposition and independent lawmakers, was submitted to the National Assembly on Saturday. A secret vote is scheduled for a plenary session at 2 p.m. on Friday.

According to the motion, the three parties said Park committed a grave violation of the constitution by allowing her secret inner circle, including her friend Choi, to interfere in state affairs.

The motion also accuses Park of failing to properly respond to the sinking of the Sewol ferry, in which 304 passengers died after a delayed government response. The motion said Park had violated Article 10 of the Constitution, which demands she protect the lives of citizens.

The opposition parties did consider revising the motion to recruit as many Saenuri lawmakers as possible. Passing the impeachment requires 200 votes in the 300-member legislature. Saenuri support is crucial, as the three opposition parties and independents together have 172 votes.

That position changed Wednesday after the media reported that Park invited a hair stylist to the Blue House and was groomed by her during the crucial first hours of the Sewol rescue operation.

Local media reported that she spent 90 minutes having her hair styled even after she received a phone call report that more than 300 passengers were still trapped inside the ferry.

The Blue House admitted that the hairdressing was done, but said the president spent only 20 minutes on it.

Rep. Woo Sang-ho, floor leader of the main opposition Minjoo Party, said he received the request from the Saenuri lawmakers to remove the item from the motion, but the party leadership decided to reject it.

Rep. Park Jie-won, floor leader of the People’s Party, also said Wednesday that the party won’t accept the request, citing rising public anger over the Sewol issue. “We will maintain the current motion,” he said.

The three opposition parties further intensified their alliance and urged the Saenuri lawmakers to support the impeachment. “I am appealing to the Saenuri lawmakers,” said Rep. Choi In-ho of the Minjoo Party. “Whether you are a Park loyalist or not is meaningless before the people’s demands. You have to follow the people’s demands and the constitutional consciousness.”