Woo continues to stay in hiding

Woo continues to stay in hiding 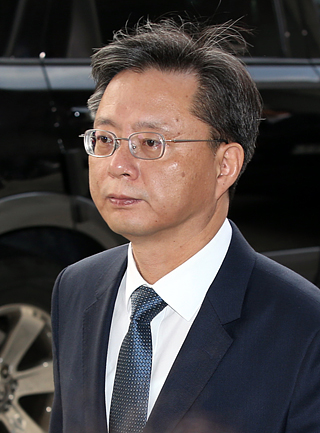 Woo Byung-woo, former senior presidential secretary for civil affairs, has apparently disappeared and the special legislative committee tasked to look into the presidential corruption scandal does not know where he is.

Woo, a former prosecutor who left the Blue House in late October, just as public ire over the president and her confidante, Choi Soon-sil, began to swell, did not show up at the National Assembly on Wednesday for a public hearing.

But he did not have to — the committee failed to hand him the legal documents requesting him to appear because they could not find him. The papers have legal force only when directly given to Woo or a family member who lives with him.

Members from the bipartisan committee tried in vain to meet him last month by visiting his house in Apgujeong-dong, southern Seoul, four times. On all of those occasions, however, nobody answered the door.

Upon hearing rumors that Woo and his family were hiding in a high-end villa owned by Woo’s mother-in-law in Nonhyeon-dong, southern Seoul, an investigator assisting the committee was dispatched on Tuesday, but failed again when a security guard drove him out.

Woo, who faces allegations of dereliction of duty, was supposed to be called in as a witness to answer questions about Choi and her influence.

The 49-year-old already faces a slew of allegations, separate from the political scandal — he is accused of embezzling money from a real estate company run by his family, abusing his power to get his son a position in the police force for his two-year mandatory military service, underreporting his wealth by excluding a plot of land owned by his wife in the suburbs and pressuring the game company Nexon to buy a property in Gangnam District owned by his mother-in-law.

Woo’s last public appearance was in early November when, after many refusals, he arrived at the prosecutors' office for questioning. He has now earned the nickname “loach” in local media, which refers to someone who is hard to catch.

On Wednesday, the committee issued an order for him to appear. The order carries harsher punishment than a general request, from which he allegedly fled, but is easier to avoid because the relevant documents must be handed directly to him, and him alone.

“Not appearing for the hearing is an individual freedom and right,” said Rep. Kim Sung-tae of the ruling Saenuri Party, who chairs the committee, “but abusing the law under the cause of human rights and hiding just clearly shows how shamelessly statecraft has been monopolized.”

If Woo does accept the forced order to appear for a hearing but does not actually show up, the special legislative committee can sue him for contempt of the National Assembly. If a local court finds him guilty, he can be jailed to up to five years.