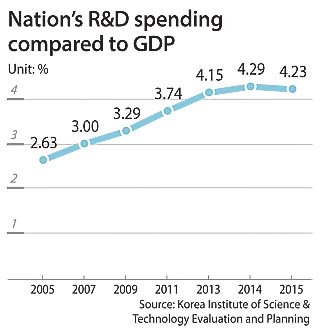 The portion of gross domestic product taken up by research and development spending shrank in 2015 for the first time in 14 years, the Ministry of Science, ICT and Future Planning said Thursday.

While overall R&D spending in the nation still grew in total, its percentage of total GDP dropped, largely due to large conglomerates cutting down on R&D investment.

According to the ministry, total R&D spending last year amounted to $58.3 billion, up 3.5 percent from 2014. The figure accounted for 4.23 percent of Korea’s GDP, which is 0.06 percentage points less than the previous year.

“Reduced spending in the private sector largely contributed to the downturn,” said Kim Jin-hyung, a director at the ministry’s research system innovation division. “R&D spending by the top five companies, which accounts for over a third of investment from the private sector, fell last year.”

Still, total R&D spending got a boost from investment by small and midsize companies as well as start-ups. Small and midsize companies spent a total of 6.38 trillion won, up 7.2 percent year on year, while start-ups spent 5.83 trillion won, up 10.2 percent. “Based on the data, the ICT Ministry will work on policies to ramp up R&D investment from the private sector, especially the top players,” Kim said.

Korea is ranked sixth in the world in terms of R&D spending after Germany and France. The United States, China and Japan are the top three.