Credit card spending up near protests

Credit card spending up near protests 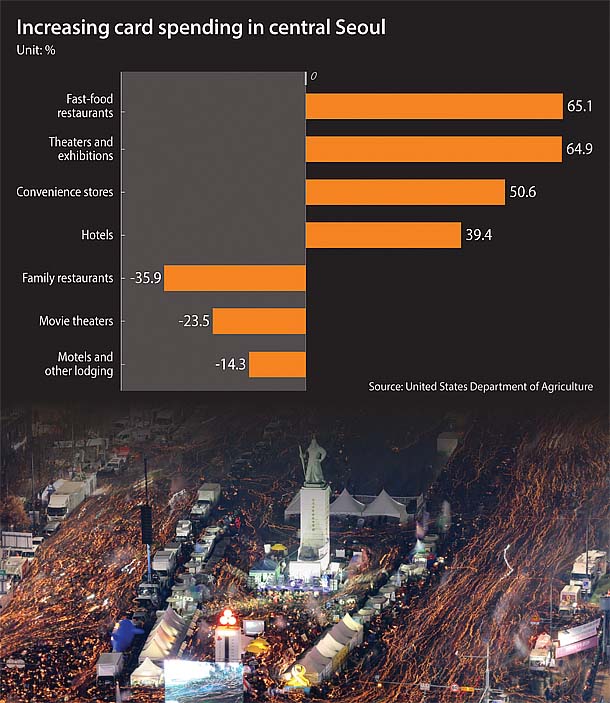 Since the public has rallied in Gwanghwamun, central Seoul, every Saturday in the wake of the scandal involving President Park Geun-hye and her confidante Choi Soon-sil, restaurants and convenience stores in the neighborhood have benefited.

Credit and debit card spending at stores in Gwanghwamun and surrounding areas have increased an average of 20 percent compared to a year ago, according to a study by KB Kookmin Card.

“During the past six weeks, the number of people using their cards in businesses such as fast-food restaurants, convenience stores and hotels in Jongno District, Seoul, soared drastically compared to last year,” KB Kookmin Card said in a press release.

When breaking down the analysis showed that on Saturdays from Oct. 29 to Dec. 3, consumers used their cards 49,994 times in fast-food restaurants in the Gwanghwamun area, a 65.1 percent rise compared to the same period last year when cards were used 30,283 times.

“It’s because fast-food restaurants and convenience stores tend to stay open late,” explained KB. “And it’s easier to consume food from these businesses while people are out in the streets.”

Many protesters also made their way to neighboring Insa-dong and Daehak-ro. Some spent time watching plays and musicals in Daehak-ro before taking part in the rallies.

The number of card swipes in Daehak-ro increased 64.9 percent compared to the same period last year to 1,393.

Other beneficiaries of the candlelight vigils include hotels, as people are traveling to Seoul from other parts of the country to participate.

Koreana Hotel in Gwanghwamun said all 337 of its rooms were occupied Nov. 12 when an estimated one million people rallied nearby. The hotel was also booked on Nov. 26 and Dec. 3, when the crowd expanded to an estimated 1.5 million.

“All of our rooms are booked every Saturday,” said a Koreana Hotel spokesperson. “Many make reservations via smartphone or the hotel’s website.”

KB Kookmin Card said in the last six weeks, 2,961 cards were used in to book rooms in the area, a 39.4 percent increase compared to last year.

But smaller lodging businesses such as motels have seen credit card use fall 14 percent.

Market insiders speculate that this is because protesters coming to Seoul every Saturday for the rally are mostly families who prefer staying at a more upscale venue.

Movie theaters and family restaurants in and around Gwanghwamun have suffered as well as credit-cards use has dropped 35.9 percent and 23.5 percent.