Time traveling to fix life’s mistakes : A man visits his past to protect his love in ‘Will You Be There?’

Time traveling to fix life’s mistakes : A man visits his past to protect his love in ‘Will You Be There?’ 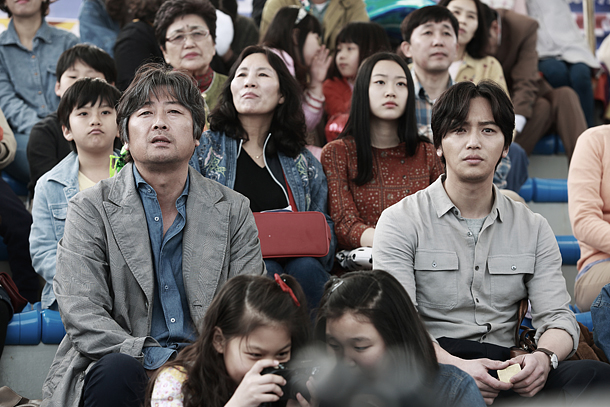 “Will You Be There?” is a fantasy film that has been adapted from French novelist Guillaume Musso’s best-selling 2006 release that goes by the same title. [LOTTE ENTERTAINMENT]

“If you could return to the past, when would you choose to go back?” This question is what leads the plot of the upcoming local fantasy film “Will You Be There?”

Directed by Hong Ji-young (“Marriage Blue”), and starring actors Kim Yun-seok (“The Priests”) and Byun Yo-han (“Socialphobia”) as the main protagonists, the film has created a great deal of buzz, partly because it is an adaptation of the popular French novelist Guillaume Musso’s best-selling 2006 release of the same name.

“Although there have been many requests from the United States and European nations to adapt the novel into a movie, I have been refusing all the requests,” said the French novelist in a press release.

“However, I decided to accept Korea’s offer to adapt it to screen. I believe Kim, who I got to know through ‘The Chaser’ (2008), is an actor that can make a very deep impression through his acting.”

The story unfolds as surgeon Su-hyeon (Kim) receives 10 mysterious pills that would take him to the past from an old man in Cambodia while performing volunteer medical service in the country. As a single father facing imminent death from lung cancer, Su-hyeon only has one wish: to see again his first love for the last time.

By swallowing the pill, the older Su-hyeon goes back 30 years to 1985 to face his younger self (Byun), who initially refuses to believe older Su-hyeon’s story but decides to listen to him after learning that his first and only love Yeon-a (Chae Seo-jin) would soon die from a fatal accident.

As desperate as the older Su-hyeon is to save Yeon-a, however, he tells his younger self to break up with the woman after saving her in order to protect his future daughter, who is to be born from another woman a few years after Yeon-a dies.

Throughout the 111 minutes, the film depicts the endless efforts and sacrifices Su-hyeon is willing to endure to save the loves - his first love and his daughter - of his life.

The movie in some sense is an echo of the 2013 romance “About Time,” in that the protagonist can slip through time and that it highlights the chance a father has to lose his future child by making even the slightest change in his past.

The film mostly follows the original novel, although there have been some changes to make it match Korean tastes.

“The movie has two major changes from the original novel,” said the filmmaker during a press conference on Monday.

“The relationships of the past Su-hyeon and his father, and of the older Su-hyeon and his daughter have been portrayed in more detail. Also, the job of Yeon-a has been altered [into a trainer].”

An additional change is the story’s setting. While the film was mostly shot in Busan and Geoje Island, South Gyeongsang, the novel takes place in San Francisco.

What may have been too quiet a film also adds bits of comedy and suspense. While the fact that the older Su-hyeon is only allowed to stay in the past for around 20 minutes adds slight suspense, especially when he performs surgery on a dying Yeon-a, actor Kim Sang-ho’s role as Su-hyeon’s friend also adds bits of humor to what could have been a too sentimental story.

Although it sometimes lacks logical sense in some scenes that take place in the past, it nevertheless is a heart-warming movie that gives audiences a chance to think about time, love and the incompleteness of human beings.

The film, which is rated 12 and above, will open nationwide on Wednesday.