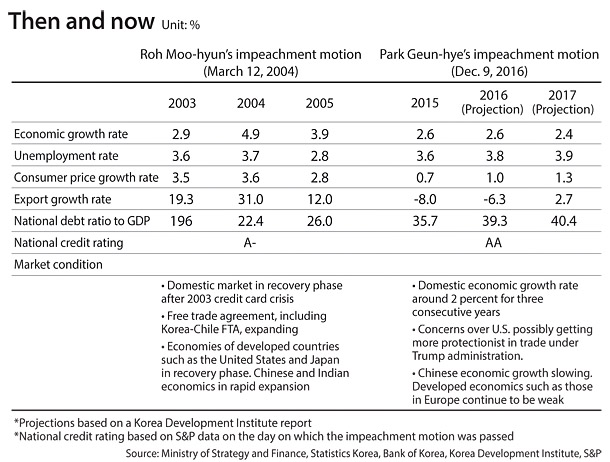 The impeachment of President Park Geun-hye sent the financial authorities scrambling to contain the economic impact and restore order Friday.

The markets barely moved because the vote was announced after closing. Analysts had differing views on how the impeachment will impact the country’s economy.

The government’s major financial players - the Ministry of Strategy and Finance, the Bank of Korea and the Financial Services Commission - held emergency meetings after the announcement and launched 24-hour market monitoring programs.

Yim Jong-yong, head of the Financial Services Commission (FSC), said in his meeting that the regulatory agency will be particularly focused on expanding lending by state run banks to small and medium sized companies and low-income earners and stabilization of the bond markets affected by rising interest rates.

To discuss specific measures to expand lending, the regulator will hold a meeting with state-backed banks, including the Korea Development Bank and Industrial Bank of Korea on Sunday.

The FSC will call a series of meetings by industry sectors - banking, insurance and securities - on Monday and the FSC head will meet the executives of the financial institutions to discuss future direction.

The Bank of Korea vowed to monitor foreign exchange markets.

If history is any guide, the impeachment of president Roh Moo-hyun in 2004 brought disorder to the markets in the short run but didn’t deal a blow to annual economic growth.

In 2004, the Constitutional Court rejected Roh’s impeachment and he returned to power on May 14, after 63 days.

Despite the modest impact in the past, some analysts believe that things are different now - and not in a good way.

The critical point is that the economic chief doesn’t have as strong a standing as Lee Hun-jai, the finance minister who is credited with stabilizing the market in the aftermath of the 2004 impeachment motion.

President Park Geun-hye proposed to replace Yoo Il-ho, minister of strategy and finance, with Yim Jong-yong, the FSC head, in the middle of the political scandal involving her confidante Choi Soon-sil.

With the impeachment motion passed, it is unlikely that Yim will replace Yoo, but analysts say that the incumbent minister already lost leadership gravitas.

“The conditions right now are much more chaotic and Korea is without an economic command center,” said Kim Jung-sik, professor of economics at Yonsei University. “The best solution is to alleviate political uncertainties. But as a secondary measure, we need the finance minister to step up to the plate and take control.

“The Korea Development Institute set its economic growth projection for the fourth quarter to zero in comparison to the previous period without taking political turbulence into consideration,” he continued. “And with the ongoing political turmoil, consumption will shrink and affect the market further.”

But others think that the risks are already priced into the markets.

“From my perspective, the impact of impeachment motion has been already been reflected in the market,” said Kim Jae-hong, head of research at Shinyoung Securities said. “It would have been a bigger problem if it didn’t pass.”

When asked about the long term impact that motion would have, including on Koreans’ spending, Kim said, “Psychologically, it will have some negative effect, but if you look at the Korean economy, there are almost no positive expectations for it on the macro scale. There is no anticipation that economy will recover, which is already mirrored by the market.”

Park Seung, governor of the Bank of Korea under the Roh administration, called for government officials to proceed with economic policies.