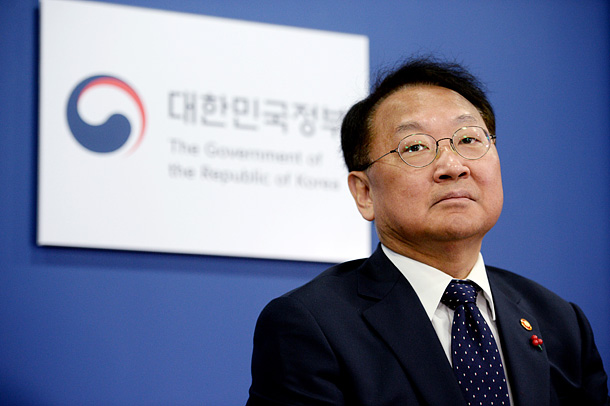 Finance Minister Yoo Il-ho attending a press conference with foreign journalists in downtown Seoul on Sunday. Yoo told them that the Korean economy will not be affected by Friday’s impeachment of President Park Geun-hye. [NEWSIS]

The government continued to work over the weekend to contain any economic instability that may surface after Friday’s impeachment of President Park Geun-hye.

Deputy Prime Minister of Economics and Minister of Strategy and Finance Yoo Il-ho on Sunday met with foreign journalists in Seoul and tried to assure them that the Korean economy will remain stable regardless of the political changes and that the government will continue its monetary and fiscal policies as planned.

“All national systems of the country, including our political and economic governance, remain intact and continue to function in a stable manner, and I want to emphasize that there exists no sense of confusion or uncertainty in this regard,” Yoo said Sunday. “I will continue to act as a command center for economic policies. With sufficient room for fiscal and monetary policies, Korea’s macroeconomic conditions will be managed in a stable manner, and we will continue to work on solid growth.”

On Saturday, the finance minister met with heads of local financial institutions and business associations to encourage them to proceed with their plans, including hiring, hoping to minimize the impact of the scandal.

Yoo also said Saturday, while meeting with heads of financial institutions and business groups, that the government will work to secure the country’s credibility by increasing its communications with foreign investors, international credit agencies and organizations.

Korea’s credit rating seemed unlikely to be harmed by the impeachment. Moody’s, in a report released after the decision, said while the impeachment will start a period of uncertainty regarding future leadership, it will unlikely affect the current government and policy-making procedures.

However, despite the government’s effort to contain worries in the aftermath of the impeachment there have been concerns regarding the ambiguity of leadership on the Korean economic front, which may affect the economy next year.

While Yoo has stressed that he will remain as command center to the economic government bodies, the nomination of Financial Services Commission Chairman Yim Jong-yong by President Park as Yoo’s successor last month continues to confuse the market about the leadership of the government’s economic policies.

Market experts stress that Prime Minister Hwang Kyo-ahn, who is currently the acting leader succeeding Park, has to decide whether to allow Yoo to continue as Finance Minister or to allow Yim to take over.

Experts have said that under the current coexistence of Yoo and Yim, the government has been unable to decide on the direction of macroeconomic policy or even proceed with new regulations.

“The most important thing or one that should be prioritized at this moment is to decide on who will become the new deputy prime minister,” said Baek Woong-ki, a professor at Sangmyung University. “It is essential for the government to have a command center for economic policies to deal with various economic uncertainties coming from the domestic political issues and the incoming administration in the United States.”

Kwon Tae-shin, president of the Korea Economic Research Institute, agreed that the government and the National Assembly need to at least cooperate on economic issues.

“I think it is important for them to have Yim become the new deputy prime minister and that the National Assembly should start the public hearing process as early as next week since there are no other options,” said Kwon. “I think the government can’t even come up with plans for next year [due to the lack of leadership].”