Deciding what to do with FKI is complicated

Deciding what to do with FKI is complicated 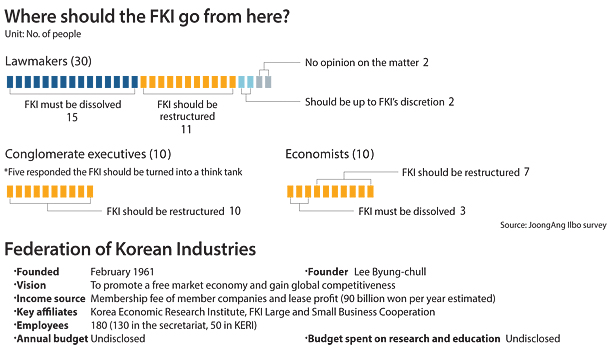 The Federation of Korean Industries (FKI), which has been criticized for its central role in allegedly collecting funds from Korea’s major conglomerates for President Park Geun-hye and her confidante Choi Soon-sil, may be dismantled and turned into a private think tank akin to the Heritage Foundation, a think tank based in Washington D.C.

After business tycoons in Korea including Samsung Electronics Vice Chairman Lee Jae-yong said they will leave the FKI during a day-long parliamentary questioning Tuesday, the group held a board of directors meeting the following day to discuss a restructuring plan.

The FKI was founded in 1961. Its founding members included Lee’s grandfather Lee Byung-chull, the founder of Samsung Group. It is Korea’s largest lobbying group.

An official from the FKI said, “After the Choi scandal, we have been trying to figure out an overhaul plan. Several different ideas were suggested but the group has narrowed the plan down to possibly reorganizing itself into a research think tank like the Heritage Foundation.” The idea was raised during the hearing by Koo Bon-moo, LG Group chairman. 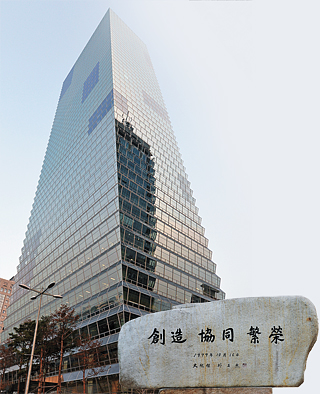 Left: The Federation of Korean Industries building in Yeouido, western Seoul. Right: A monument inscribed with calligraphy by the late President Park Chung Hee in 1979 stands in front of the FKI building. [JOONGANG ILBO]

Other members of the FKI welcomed the idea.

“It’s highly advisable that the FKI be overhauled into a think tank,” said a chairman of a Korean conglomerate on the condition of anonymity.

If the FKI is restructured in that way, it’s highly probable that it will merge with the Korea Economic Research Institute (KERI), a local think tank that was launched in 1981 with donation by members of the FKI.

While the idea itself offers a future for the FKI, a merger with KERI poses challenges.

The Heritage Foundation is a conservative research foundation founded in 1973, which aims to promote conservative public policies. It is a think tank operated on donations. In comparison, the FKI is financed by membership fees, with nearly half of its annual budget coming from major companies.

While it is estimated that the FKI has a yearly budget of about 90 billion won ($77.4 million), the precise numbers and how the budget is used remains confidential. The group has no legal obligation to reveal such details. The FKI has also refused to disclose any auditing of its books or information on membership fees.

Kim Sang-jo, a professor of Economics at Hansung University, said, “They may redesign the future of the FKI, such as turning it into a think tank, but drastic restructuring steps such as disposing of its asset to pay off its liabilities must be taken first.”

One of the sources of the Heritage Foundation’s power is the reports the institution publish based on research. The reports are distributed to movers and shakers to recommend policy changes.

The FKI’s source of power is concentrated in its secretariat, which works as a bridge between the political community and business circles.

KERI, which actually publishes reports like the Heritage, has nothing like the clout of its U.S. counterpart. About 50 research staffers work for KERI but their research autonomy and independence are minimal. KERI often came under fire for publishing reports that do not contradict the interests of FKI member companies.

FKI began promising a drastic renovation plan in September when it first came under fire for allegedly collecting funds from Korean conglomerates for the Mi-R and K-Sports foundations, which are suspected to have been created to be used as a source of money for President Park after she leaves office. Not much happened until the hearing last week.

“Turning the FKI into a research institution is the most likely scenario,” said an official from the group. “We will have to gather the opinions of our members and come up with a detailed reorganization plan as soon as possible.”

Still, some remain skeptical and call for its complete dissolution, which is possible if three-fourths of its members agree. A provisional general meeting can be convened by the authority of the chairman. This means Huh Chang-soo, chairman of the FKI and head of GS Group, can summon the members for a vote.

The Ministry of Trade, Industry and Energy could also annul its official approval of the FKI if it decides the FKI was guilty of infractions that went against the public interest or against the reasons it was established.

A complete dismantling, however, would have its own side effects. The FKI is heavily in debt, for one thing.

Some also argue that the intellectual properties and global network that the FKI has built over the years would go to waste, not to mention 250 employees that will lose their jobs if the FKI is disbanded.

According to a survey by the JoongAng Ilbo of politicians, executives of conglomerates and academics, the idea of turning the FKI into a think tank was predominant, modeled after the Korea Development Institute or the Heritage Foundation.

Meanwhile, in the wake of the contentious hearing, the state-run Korea Development Bank and Industrial Bank of Korea said they are withdrawing their membership in the FKI.