Belief in getting ahead shrinks among Koreans

Belief in getting ahead shrinks among Koreans 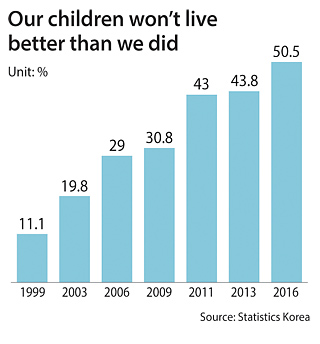 More Koreans are pessimistic about whether their children can climb the social ladder - to enjoy better lives than their parents - due to the dearth of high quality jobs.

According to Statistics Korea Monday, five out of 10 Koreans surveyed last year said they believe their children won’t be more comfortable than they were, which is higher than three out of 10 a decade ago.

The statistics were gloomiest for respondents in their 30s. While only 30 percent were pessimistic in the 2006 survey, that figure doubled to 60 percent last year.

“[In the past] there were people who were confident that their lives would improve if they worked hard enough, even if there is income disparity among the rich and the poor. But today they seem less optimistic,” said Kim Hi-sam, a professor of education at Gwangju Institute of Science and Technology. “In the past 20 years, there have been a rising number of people who are less optimistic about their chances of climbing the social ladder and this might have negative impacts on productivity in the future.”

People with low incomes were more pessimistic about their futures when compared to those with high incomes, the statistics agency said.

“One of the biggest reasons that Korea is having such problems is that Korea went through industrialization in 50 years, whereas most other countries in the world took 100 years to 200 years, which means that the country didn’t have enough time to be prepared for the rapid changes in social welfare and education sectors,” said Yuh, Yu-jin, a researcher at the Korea Institute for Health and Social Affairs.

Even though many Koreans are going to college to gain better job opportunities, recent statistics show that simply having a degree may not be enough to climb the social ladder.

“More Koreans are pursuing higher education but there is an imbalance in supply and demand in the country’s labor market,” said Kim Kyoung-yong, a director at Statistics Korea. “The number of women entering college has increased significantly compared to the past but the data shows that it didn’t have much of an impact on raising the overall economically active population.”

The data shows that the rate of Koreans with college degrees was 45 percent, but only 21.6 percent of jobs required such degrees or specific knowledge of technology and management.

“We also found big gaps in terms of job stability between large companies and small companies,” said Kim. “Big companies had higher productivity and operating profits compared to small ones.”

Labor productivity for companies with fewer than 300 workers was only about 37 percent of the rate for big companies in 2001.
That figure dropped to 29.4 percent in 2013. The operating-profit-to-sales ratio for large companies was around 5 percent in 2014, while it was only around 3 percent for small companies.

Meanwhile, other data released by the government showed that the ongoing corporate restructuring is taking a toll on the local labor market.

In some analyses, employment is measured in the number of workers who have insurance.

The number of employees insured in the transportation and manufacturing sector, which includes the shipping industry, dropped by 284,000 when compared to the previous year.