For golfer Lydia Ko, a year-end filled with separation woes

For golfer Lydia Ko, a year-end filled with separation woes 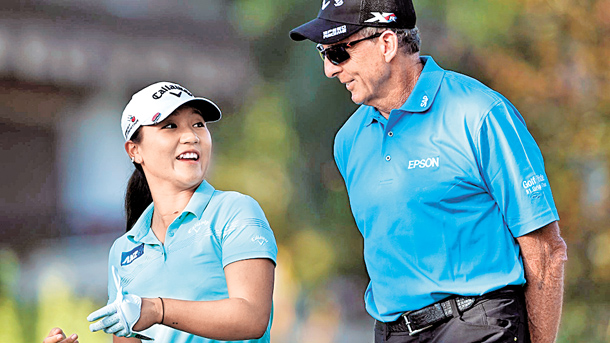 Lydia Ko, the world’s top professional female golfer, is making some big changes ahead of next year’s season.

Not only has the Korean-New Zealander changed her caddie, Jason Hamilton, she also recently parted with her swing coach David Leadbetter. Ko will also be playing with a new set of golf clubs next year, after recently signing a contract with equipment maker PXG.

Concerns arose that the 19-year-old golfer might be pursuing too much change at once, but Ko doesn’t seem to have any worries. “My performance started lagging around the midseason this year, but I’m going to get back on track starting next year,” Ko told the JoongAng Ilbo last Friday while she was at a club fitting shop in Gangnam District, southern Seoul. “I really like my new clubs.”

With her sticks set, Ko just has to decide on which golf balls to use. She is currently dithering over two manufacturers (which she would not name). “Company A’s balls go further with irons, but Company B’s balls fly longer with drivers. I’ll have to test them a little more to make a final decision.”

When asked about her new caddie, Ko said, “I felt it would be inappropriate to scout a different player’s caddie, so I recruited someone from the PGA Tour. We get along well, and he’s an able man, too, so I like him.”

If there is one man who’s concerned about Ko, it’s Leadbetter, the British coach who taught Ko for the last three years. In an interview with the Golf Digest on Sunday, Leadbetter blamed her “meddlesome parents” for her recent slump.

After failing to win gold in the Rio Olympics, her biggest goal this year, Ko started performing worse as her father became more involved, Leadbetter said while recalling how he tried to put a stop to it. Leadbetter added that the timing of Ko’s parting with her caddie Hamilton “didn’t make any sense,” since she had just three weeks ahead of her to compete for the title of Rolex Player of the Year.

Despite the breakup, Leadbetter is still notably concerned about the young golfer. “The proposed solution is always to hit more and more balls, when Lydia actually needed to be on the practice range less and in the gym more,” the coach said, recalling how Ko’s father only prescribed her more swing practice.

“The truth is, she’s a great golfer, but not a great athlete. To keep up her performance, she needs to keep up her strength and flexibility, or it affects her swing and her energy.”

In late November, Ko started in the CME Group Tour Championship, considered the season finale, with a 4-under 68, following Leadbetter’s instructions. Ko then recorded a 62 on the second round, but her scores went downhill after her father stepped in on the third and fourth day. The interference cost Ko both the Player of the Year title and the Vare Trophy, which is given to the player with the lowest average score in the season.

“They tell her when to go to bed, what to eat, what to wear, when to practice and what to practice. And they expect her to win every tournament,” said Leadbetter, lamenting how Ko was unable to trust herself enough because of her parents’ influences. “They are good people, who love their daughter and want the very best for her, and Lydia has never been to college and is still young. But they are naive about golf.”

“When she was poised to go forward, as she always has, she went backward,” the coach said, adding that “they’ve got to let the bird fly from the nest.”

Ko has kept silent on Leadbetter’s comments, while one of her associates said they “did not feel the need to respond.”

“The reason for the decline in the later rounds of the Rio Olympics was because she was going through a tight schedule,” the associate said, “and she had been having some confusion with Leadbetter’s eccentric swings and returning to standard swings. While Lydia Ko does listen to her parents, she’s the one making the decisions. Next year’s performances will prove so.”