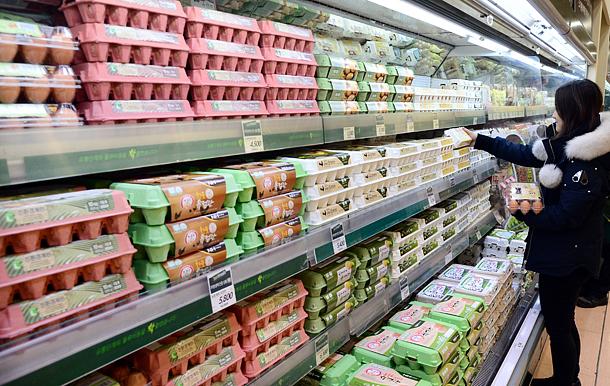 A consumer picks eggs at a store in Seoul on Monday. As avian influenza spreads across the country and chickens are culled, egg prices soar. [NEWSIS]

When severe acute respiratory syndrome, or SARS, began to spread from Hong Kong in April 2003, Korea responded by setting up a so-called SARS government situation room by the end of that month.

Then-Prime Minister Goh Kun issued a public statement to raise awareness of the threat and started receiving two daily reports from a team of experts. The ministries of interior, national defense and health and welfare were mobilized to the highest level of alert.

When the viral respiratory disease outbreak ended, not a single case was confirmed in Korea.

Thirteen years later, in the midst of a new disease outbreak, Korea has forgotten its vigilance.

The highly pathogenic H5N6 avian influenza (AI) virus is spreading to all corners of the country with massive speed and force, but the government has done little to combat it, local pundits argue.

Nearly 10 million chickens and ducks have been culled on domestic farms over the past 26 days since the virus was detected at two separate farms in Haenam County, South Jeolla and Eumseong County, North Chungcheong, on Nov. 16.

Yangju, in Gyeonggi, just 35 kilometers (21.7 miles) from Seoul, is the closest the virus has gotten to the capital so far.

“This year’s AI is not much different from the outbreak we had in 2010,” said Kim Jae-hong, dean of the College of Veterinary Medicine at Seoul National University. “But there’s one aspect that clearly sets it apart from six years ago: farmers and government officials don’t take the situation seriously enough.”

Korea’s first case of the H5N6 strain of the virus was discovered on Oct. 28 in Cheonan, South Chungcheong in the feces of migratory birds. The same strain was found on Nov. 10 on the banks of Mangyeong River in Iksan, North Jeolla. By Nov. 16, it reached nearby farms.

The first major government meeting discussing the outbreak wasn’t held until a week after that. It was presided over by the head of the Office for Government Policy Coordination, which is under the Prime Minister’s Office. Prime Minister Hwang Kyo-ahn, who is currently the acting president, was absent that day.

Hwang’s visit to a makeshift AI situation room in Uijeongbu, Gyeonggi, on Nov. 25 was his first public response to the outbreak.

In the latest AI update, a farmer in Cheonan reported Monday to authorities that 10 of his chickens died around noon, while a farmer nearby claimed two hours earlier that 60 chickens on his farm died. Both farms tested positive for the virus in the afternoon. All 130,000 chickens on both farms will be culled.

Seo Sang-heui, a veterinary medicine professor at Chungnam National University in Daejeon, said the government was far too reliant on local farmers to report viruses on their own.

“The government needs to improve their response system by putting more people on the disease control team and investigating farms that could be affected in the future,” said Seo.