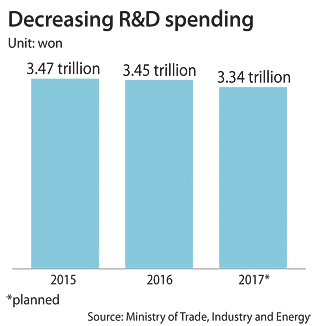 The government will scale back overall spending on research and development in technology next year, the Ministry of Trade, Industry and Energy said Tuesday, but the portion taken up by research into emerging industries with growth potential will increase.

The ministry plans to cut R&D expenditure from 3.45 trillion won ($2.96 billion) in 2016 to 3.34 trillion in 2017, a 3.1 percent decrease. The budget cut is the result of restructuring that the ministry underwent this year to minimize spending on certain projects that it considered more customary than innovative.

The ministry’s investment in the country’s overall R&D spending continues to occupy a smaller piece of the pie, going from 18.3 percent in 2015 to 17.8 percent in 2016 and now falling to 17.2 percent next year.

Even though the ministry’s R&D spending has shrunk, it will be more focused. About 90 percent will go toward research meant to raise the nation’s competitive edge in emerging industries, including robots, automated cars and renewable energy, while the rest will go toward legacy projects. The spending on innovative technology, around 3.06 trillion won, will be a 2.5 percent increase from this year.

“We are looking for industry prospects that can lead Korea into the ‘fourth industrial revolution,’” a ministry official said. “The ministry also plans to extend support to companies with high-value technologies in the information services and design sectors, as they are expected to enhance the nation’s competitiveness in exports.”

The ministry has allocated 211.7 billion won to research in smart cars, robots and semiconductors, a 43.4 percent increase from this year’s budget of 147.6 billion won. “Developing cutting-edge technology in these industries is vital since they will be growth engines for us in the near future,” the official said.

In renewable energy, the ministry has raised spending from 228.4 billion won to 243.2 billion, a 6.5 percent increase. The official said the industry will be key to abiding by the climate change accord that Korea signed in Paris earlier this year. A total of 39.9 billion won will be spent on R&D in smart grid technology.

Six new sectors were added to the ministry’s list for 2017. Most notably, it allocated 43.7 billion won to energy storage systems for the first time and set aside 27.3 billion won for experimental fusion reactors.

Korea has made huge leaps in R&D spending in the past few years, according to OECD data. In 2000, the country spent just 2.18 percent of GDP on R&D, about 1.8 percent lower than the leader at the time, Israel. By 2014, Korea’s R&D spending to GDP had jumped to 4.2 percent, outperforming runner-up Israel by 0.1 percent.