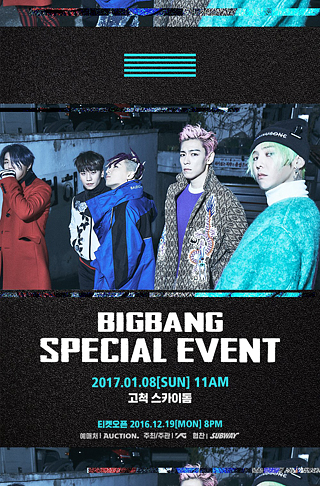 Big Bang is scheduled to perform at the Gocheok Sky Dome on Jan. 7 and 8. [YG ENTERTAINMENT]

This monumental release is also their first full-length record in eight years, and will be their last before its members take a break for mandatory military duties.

The boy band took the top three spots on all eight major music sites upon release of the newest songs from the album, “FXXK IT,” “Last Dance” and “Girlfriend,” while the music videos for their new singles surpassed a combined five million views within twelve hours of their uploading.

Additionally, their remaining eight tracks which were previously unveiled last year reappeared on the top 100, including hits such as “Bang Bang Bang” and “Loser.”

Their latest record was also well-received internationally, taking the top spot on the iTunes album charts of 16 countries worldwide, including Hong Kong, Indonesia, Mexico, Norway, and Ukraine, and debuted at fourth on the US chart. The band’s album made an appearance on the home page of iTunes as well.

The group has been celebrating their tenth anniversary this year with a number of concert tours.

They recently wrapped up their Japanese tour in Fukuoka on Sunday, and are scheduled to perform a two-day concert at the Gocheok Sky Dome on Jan. 7 and 8.

Upon returning to Korea, the band members attended a promotional press conference at the YG Entertainment headquarters in Mapo District, western Seoul.

“We’ve wanted to release a full-length album for the past two years, but it took this long to complete,” said band member Taeyang. “I feel more attached to this album since it was so difficult to make.”

“The album was delayed since it was produced not with popularity in mind, but rather how much we were satisfied with it.”

Their latest singles will be performed live for the first time on the Dec. 18 airing of SBS music show “Inkigayo” and the band will also be making guest appearances on MBC variety shows “Radio Star” and “Infinite Challenge.”

Tickets for a special fan event before the concert on Jan. 8 will go on sale on Dec. 19.