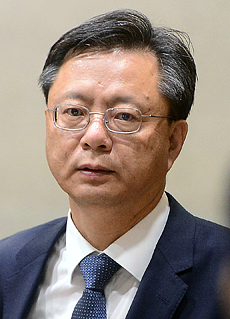 The National Assembly is getting close to tracking down Woo Byung-woo, the former presidential secretary for civil affairs who has been on the run to avoid questioning over his role in the abuse of power scandal that led to the impeachment of Park Geun-hye.

Its uncommon allies in the hunt: average angry Koreans.

Several people, including Woo and the presidential friend at the center of the scandal, Choi Soon-sil, did not respond to summons by a bipartisan special legislative committee that held a series of public hearings last week to grill key suspects in the scandal.

Former and current lawmakers have come together to offer a nearly 15 million won ($12,855) bounty for details on the whereabouts of Woo, who has earned the nickname “mikkuraji” (loach) in local media, a Korean term for someone hard to catch.

A personal aide of Rep. Sohn Hye-won from the main opposition Minjoo Party of Korea, who is one of the committee’s 18 members, said on a CBS radio show Tuesday morning that ordinary Koreans were eagerly hunting Woo down.

“People all over the country are spending their own money riding in taxis and buying coffee in this blistering cold, shivering as they search,” said Kim Seong-hoe, Sohn’s aide. “I don’t think any of these people are actually out for the reward.

“We’re getting 20 to 30 calls every day,” said Kim. “They’re really out investigating. There’s one person who calls us all throughout the day, giving us clues like how he’s standing in front of a building [in which Woo is suspected to be] and that the lights on the third floor are on.”

The hard-core Woo-hunters are members of the Korean website DCinside.

The craze, Kim said, is rooted in the sheer “rage” that Woo might get away without any sort of punishment.

Woo, a former prosecutor who left his senior Blue House post in late October, faces allegations of dereliction of duty and was supposed to answer questions about Choi and her influence on Dec. 7.

The committee couldn’t subpoena him directly because it couldn’t find him. The documents have legal force only when handed to Woo or a family member who lives with him.

Yonhap News Agency reported Tuesday afternoon that Woo told a reporter over the telephone he would appear at a public hearing next Monday. But a spokesman from the special legislative committee said it did not receive any call from Woo.

In the Yonhap report, Woo claimed he did not respond to last week’s summons due to his “custom and principle” not to discuss work matters in public.

As to why he’s decided to accept the subpoena for next week, Woo reportedly said he would “respect” the legislature’s requests and “faithfully” respond to all questions.

An acquaintance of Woo told Yonhap that the former presidential secretary left his house in Apgujeong-dong, southern Seoul, with his family not because he intended to flee, but because he wanted to avoid reporters who have been swarming around his neighborhood.