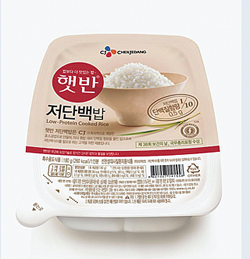 Manufactured by food company CJ CheilJedang, the product has been a steady seller and is expected to surpass 1.14 trillion won ($1.2 billion) in accumulated sales this year.

As Korea’s top-selling instant rice brand, Hetbahn currently accounts for 67.2 percent of market share. It has been particularly popular among young people living on their own and newlyweds because of the product’s convenience and comparability to conventionally cooked rice.

Manufacturing instant rice poses many challenges, one of which is maintaining texture. Cooked rice quickly turns dry and hard when left at room temperature and does not completely recover its soft texture even after it is reheated.

CJ CheilJedang’s solution was to improve packaging by making it aseptic instead of freezing, drying or using additives. Hetbahn was the first instant rice product in Korea that could be stored at room temperature.

“Our consistent goal is to provide rice of freshly cooked texture to consumers,” said Kim Byeong-gyu, a marketing director at CJ CheilJedang.

Korea’s market for instant rice this year is an estimated 240 billion won and is expected to grow next year to 300 billion won.