On taped phone clip, Choi rails at a whistleblower

On taped phone clip, Choi rails at a whistleblower 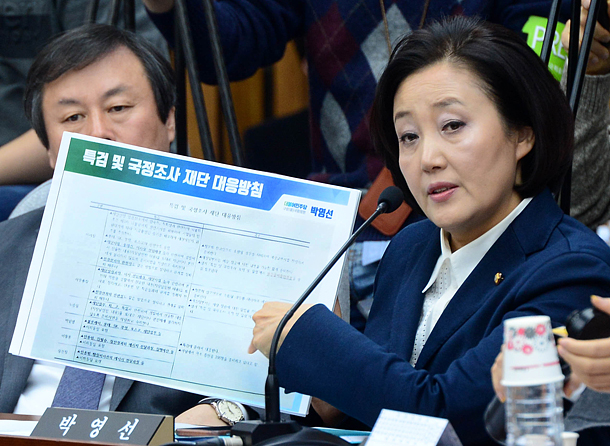 Rep. Park Young-sun, right, of the Minjoo Party discloses a voice recording of Choi Soon-sil and her subordinate, whose identity was withheld, during a special parliamentary hearing on the abuse of power scandal on Thursday. [NEWSIS]

Choi Soon-sil, the presidential friend whose meddling in government affairs led to the impeachment of Park Geun-hye, chastised an aide for having failed to stop a former K-Sports Foundation official from exposing her, according to a voice recording disclosed Thursday.

Rep. Park Young-sun of the Minjoo Party disclosed voice recordings of Choi and a subordinate, whose identity was withheld, during a special parliamentary hearing.

On the recording the 60-year-old Choi inquired about former K-Sports Secretary General Jung Hyun-sik’s interview with local media that shed light on Choi’s involvement in the alleged extorting of tens of millions of dollars in donations from big companies in collusion with An Chong-bum, former presidential senior secretary for economic affairs.

“So what did he (Jung Hyun-sik) tell [the press]? He said I told him to go to SK Group?” asked Choi in the recording.

The subordinate, who referred to Choi as chairwoman, replied, “Yes, ma’am. He told [the media] you gave him the instruction [to seek donations from SK Group] with business project guidelines drafted by Park Hyon-young. He also said senior secretary An called him to ask if he cut the deal [with SK]. He told everything.”

Park Hyon-young was one of Choi’s aides.

Choi, who was making the call from Germany prior to her return to Korea on Oct. 30, chastised the aide, saying, “Why didn’t you stop Jung from doing the interview?”

She was told that Jung was insistent on exposing what happened.

Jung revealed in October in an interview with the Hankyoreh newspaper that he went to SK Group to discuss receiving 8 billion won ($6.7 million) in donations for the foundation and that former Blue House official An was involved in the process.

After being briefed by her subordinate on the phone, Choi gave an order to “make up a story” about how the 8 billion won in donations from SK Group came about.

Rep. Park’s Thursday disclosure of the recording of Choi and her subordinate came after the four-term lawmaker made public two recordings of Choi phone calls the day before in which she gave instructions to cover-up details of the scandal that were being uncovered by JTBC, the network affiliate of the Korea JoongAng Daily.

Park’s disclosure of the recordings of Choi Wednesday was the first time the public heard her voice since she appeared at the prosecutors’ office and said she was sorry before reporters on Oct.31.

In a tense tone, Choi was recorded as saying, “Ko [Young-tae] needs to use his senses and say out loud that they (JTBC) stole [the tablet computer] and their reports are totally fabricated.”

Choi was apparently referring to exclusive reports by JTBC on Oct. 24 about a tablet computer used by Choi that was found to contain classified presidential material, including drafts of speeches with traces of Choi’s editing.

In a bid to undercut the reports’ credibility, Choi was giving instructions to say that JTBC stole the device.

Choi was also heard giving an order to spread the word that Lee Sung-han, a former secretary general of the Mi-R foundation who later detailed Choi’s shadowy influence, was making false accusations against her because he was trying to squeeze money from her.

Choi told her subordinate that unless her inner circle succeeded in painting Lee as a swindler, “All of us are destined to die.”

In an interview with the Segye Ilbo published on Oct. 27, Choi claimed Lee was “insane” and tried to extort 500 million won from her.