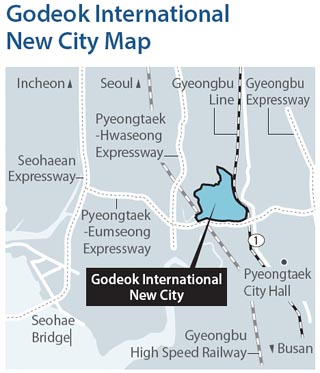 Preconstruction sales of apartments in the much-anticipated Godeok International New City in Pyeongtaek, Gyeonggi, about 40 miles south of Seoul, are kicking off.

Up first will be 752 apartments in Godeok Paragon, which could be posted as early as next month. An additional 613 units built by Sinan E&C and 1,022 units by Jaeil Engineering will go up for sale in the first half of next year.

“[The high preconstruction price] is the result of expectations for high demand as job opportunities in the region [Pyeongtaek] have gone up,“ said a real estate agent in the neighborhood. “Therefore, the market doesn’t have to rely on home seekers planning to commute to Seoul.”

Godeok International New City covers 13.4 million square meters of Pyeongtaek. The local government is hoping to create a housing community with 57,216 apartments by 2020.

The development is one of few new city projects where apartment scarcity has risen after the government decided to stop providing public land for housing construction in 2014. That law was created 33 years ago to boost development when there was a housing shortage in the greater Seoul area. But today, the biggest concern is oversupply.

Godeok International New City has attracted much interest since Samsung will be opening a semiconductor plant nearby at the end of next year that is expected to create 150,000 new jobs. LG Electronics, too, plans to build an industrial complex there in the second half of next year.

The area will get a further population boost from the U.S. military, when 45,000 American servicemen and women will relocate there from the current base in Yongsan District, central Seoul, next year.

The relatively lax conditions for buying an apartment in Pyeongtaek have also played a key role in contributing to Godeok’s rising popularity. For one thing, sales are open not only to Pyeongtaek residents but also outsiders in hopes of attracting new residents and businesses to help finance the U.S. military base’s relocation.

“At a time when bidding for newly constructed apartments in the greater Seoul area has been limited due to the [government’s] new regulations, investor interest [in Godeok] could increase,” said Yang Ji-young, head of the research team at Real Today, a real estate information provider.

The only uncertainty is the oversupply of apartments in Pyeongtaek. As of the end of 2014, the apartment supply compared to the region’s population was 124 percent, meaning housing supply exceeds the population.

On top of the already high number of apartments, 6,507 units have already been supplied this year. Next year, there will be an additional 7,706 units, followed by 8,973 in 2018. Such an excessive supply could lead to a spike in unsold apartments.

According to the Ministry of Land, Infrastructure and Transport, as of October, Pyeongtaek ranked third in the number of unsold apartments, with 3,394 units. Yongin in Gyeonggi took the No. 1 spot with 4,270 units, followed by Changwon in South Gyeongsang with 3,742.

Pyeongtaek is high up on the list because of the new supply that has poured into the market since last year. Last year, 12,137 apartments went on the market, and in the first 11 months of this year, an additional 12,551 units were provided. The apartments supplied since 2015 have exceeded the 22,000 units provided between 2011 and 2014.

Several major research campus projects currently in progress have also failed to guarantee the inflow of a large population to the region. Big developments, such as Sungkyunkwan University’s third campus, are already facing problems. Earlier this month, the university refuted the Pyeongtaek government’s claims that it would build a whole campus, saying it was only establishing a research center. This has raised concerns that the number of people moving into the area will not be as big as anticipated.

Others argue that once the industrial complexes, including Samsung Electronics’ semiconductor plant and LG Electronics’ project, get going as planned, the population in the region will double from the current 460,000 to 860,000 by 2020, which will naturally solve the oversupply problems.