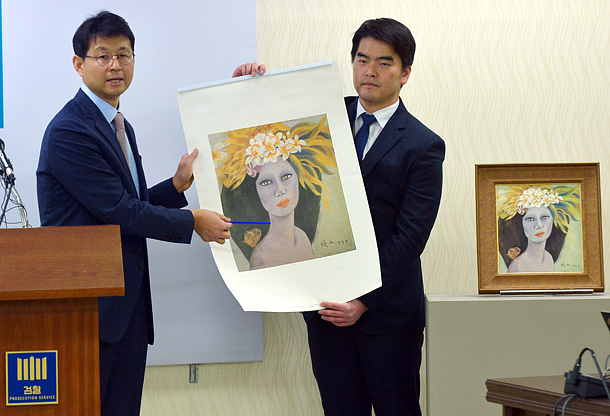 Prosecutors explain that Chun Kyung-ja’s painting, “Beautiful Woman,” is authentic at the Seoul Central District Prosecutors’ Office in Seocho-dong, southern Seoul, on Monday. They have concluded the painting is not a fake despite allegations by the artist herself and her descendants. The original “Beautiful Woman” is displayed on the right side. [JOINT PRESS CORPS]

The prosecutors concluded that Chun Kyung-ja’s painting, “Beautiful Woman,” is authentic, going against the allegation by the artist herself during her lifetime and her descendants that the painting is a forgery. Still, the 25-year-old controversy might not end, as Chun’s descendants said they would make an appeal, citing the French art experts Lumiere Technology’s inspection result.

The Seoul Central District Prosecutors’ Office said on Monday, “We have decided ‘Beautiful Woman’ is authentic, after investigating the painting’s provenance, getting appraisals of it by scientific institutions and art experts and also investigating [forger] Kwon Chun-sik, who claimed to have painted the piece.”

The prosecutors launched the investigation after Chun’s daughter, Sumita Kim, filed a complaint in April 2016 against six former and incumbent officials of the National Museum of Modern and Contemporary Art (MMCA), including the current head of the museum, Bartomeu Mari, on charges of defamation of the deceased and infringement of copyright laws.

“Scientific analyses of ‘Beautiful Woman’ revealed that it was created with the same techniques and materials, including rare and expensive seokchae (natural colors obtained from minerals) that the artist used for her other paintings,” Bae Yong-won, senior prosecutor, said during a press conference. “And in the wavelet transformation analysis, no difference [of brushstrokes] was discovered.”

The prosecutors also confirmed that “Beautiful Woman” was hanging at the house of Kim Jae-gyu, who was the powerful director of the Korean Central Intelligence Agency in the 1970s and who assassinated President Park Chung Hee in 1979. The painting was then confiscated by the Chun Doo Hwan regime and delivered to the MMCA in 1980.

“The techniques and materials found to have been used were different from what Kwon stated in the examination,” Bae said. “After seeing the original painting, Kwon admitted it was beyond the level he can forge.”

Initially, Kwon said he forged the painting in 1984, although the museum acquired it in 1980. Then Kwon has changed his position and claimed he had painted it in the late 1970s. But the painting he said he used as a reference was actually painted in 1981.

The original “Beautiful Woman” has been kept at the national museum and has not been exhibited for 25 years, since the forgery allegation emerged. Chun declared the piece is not hers in 1991 after accidentally seeing a printed poster of the painting published by the museum. Later she checked the original painting and did not change her position. The allegation was never resolved and Chun’s death in August 2015 reignited the scandal.

“It is so natural that the painting has been concluded authentic,” said Chung Joon-mo, art critic and former official of the MMCA, who has steadily claimed that it is Chun’s work since the controversy emerged.

He is one of the six officials against whom Chun’s daughter filed a complaint.

“Chun’s achievements as an artist, in particular, as the pioneer of the paintings that use traditional colors in the modern era, have been overshadowed by the controversy over the forgery allegation,” Chung continued. “Now it’s time to focus on the artist’s works.”

But Chun’s daughter Kim said in an interview with the Yonhap News that the prosecutors are biased toward the national museum, emphasizing that the French art experts group, Lumiere Technology, concluded that the painting is fake one month ago. The lawyer for Chun’s descendants said an appeal would be made.