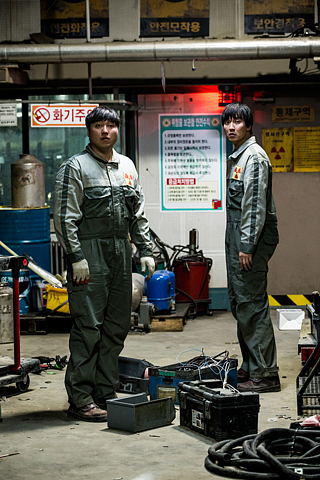 Disaster movie “Pandora” ruled Korea’s box office for the second straight week from Friday to Sunday, according to the Korean Film Council. Directed by Park Jung-woo and shown at 1,184 screens nationwide, the film raked in 8.28 billion won ($7.4 million) over three days through over a million admissions, accounting for 42.8 percent of the weekend sales.

Since opening on Dec. 7, the film has sold a total of 3.11 million admissions, resulting in 24.8 billion won in sales. However, it remains to be seen whether “Pandora” would be able to maintain its top spot at the box office when another local blockbuster “Master,” starring actors Lee Byung-hun, Gang Dong-won and Kim Woo-bin, hits theaters on Wednesday.

It exceeded the million ticket sale mark 11 days after release, which is five days earlier than filmamker Damien Chazelle’s previous hit “Whiplash,” which premiered in 2014.

The local fantasy film “Will You Be There?” debuted at third in its first weekend. Based on a French novelist Guillaume Musso’s best-selling 2006 release of the same title, it sold close to 408,000 tickets over three days. Considering that the movie is based on a best-selling book and stars veteran actor Kim Yun-seok as the main protagonist, the film’s performance is seen to be relatively disappointing.

“My Annoying Brother” dropped a spot to fourth in its fourth weekend. Despite being criticized for its banal plot and being overly emotional, the comedy is closing in on 3 million total ticket sales with a boost from the 121,000 tickets sold over the weekend. 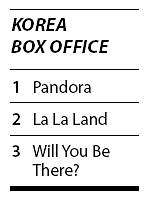 The animated “Storks,” produced by Warner Animation Group, rounded out the top five in its second weekend. The family comedy about reviving a baby delivering business sold 92,000 tickets.

The “Harry Potter” spinoff “Fantastic Beasts and Where to Find Them” reached the sixth spot, and was followed by the Japanese animated adventure film “One Piece Film Gold.”