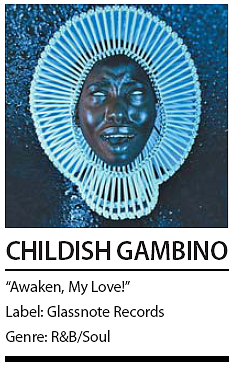 It’s OK not to “get” Childish Gambino’s third studio album “Awaken, My Love!” With its lush soundscapes and sparse lyrics, one can only gather that the funk-drenched release from the multi-talented Donald Glover is a collection that is to be felt first and understood second - if understanding is possible at all.

The outstanding first single “Me and Your Mama” and equally arresting follow-up track “Redbone” are the easiest to digest of the 11-song set. Twinkling chimes and a haunting chorus give way to fiery electric guitar and crashing drums on the former, while Gambino coos and cries out in his falsetto across the swaggering production of the latter.

Both were produced by Gambino’s longtime collaborator and Swedish music composer Ludwig Goransson, who has a hand in the majority of the tracks. It’s easy to get lost in the music, with one psychedelic-tinged track washing into another. That is, with the exception of the beachy, annoyingly catchy and slightly out of place “California.” Gambino pushes the limits of his sound on “Awaken, My Love!” and while it’s not all smooth sailing, it’s a trippy ride worth taking. AP