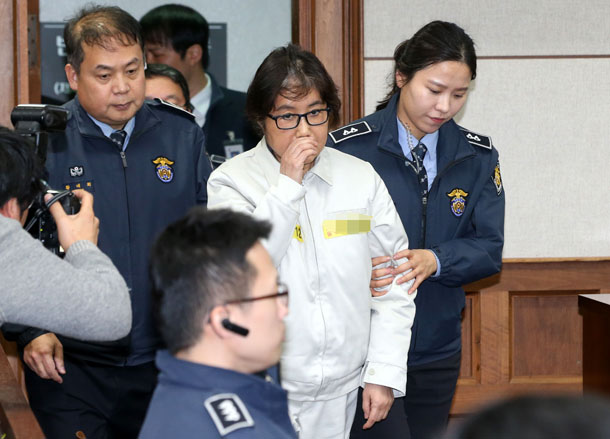 Choi Soon-sil, center, is taken to court on Monday to stand before the first hearing at the Seoul Central District Court, which will hold a criminal trial on Choi’s abuse of power scandal. Choi denied all criminal charges against her and asked the court to verify whether the tablet PC that JTBC reported is hers. [JOINT PRESS CORPS]

Choi Soon-sil, the prime suspect in the unprecedented political scandal involving her undue influence over state affairs through President Park Geun-hye, denied all charges Monday as she stood in the courtroom for her trial.

The Seoul Central District Court held a pretrial conference for Choi’s trial. Choi, 60, pleaded not guilty in all charges filed by the prosecution. Although she is not required to attend the pretrial conference, Choi wore her prison uniform and took the stand.

In November, the special investigation team of the prosecution indicted Choi, Park’s longtime friend, on charges of abuse of power, coercion, attempted coercion and attempted fraud, making clear that the president is a co-conspirator in the massive corruption scandal.

Although the prosecution could not indict Park because of her presidential immunity, naming her a suspect of a criminal investigation offered legal ground for the National Assembly to impeach her on Dec. 9.

“When I came back from Germany, I said I will submit to any punishment,” Choi said. “Since my return, I was under a lot of interrogation... Now, I want to accurately answer on all grounds.”

“Are you saying you do not admit all charges?” Judge Kim Se-yun asked.

While public rage boiled over the scandal, Choi stayed in Europe for nearly two months. She came back home on Oct. 30 and faced the prosecution’s questioning the next day. “Please forgive me. I apologize to the people,” Choi said while weeping before throngs of reporters at the time. “I committed a sin that deserves death.”

Choi’s attorney, Lee Kyung-jae, said the prosecution filed 11 charges in its indictment against Choi, and his client is not guilty on all accounts. “Of the 11 charges, eight were about Choi’s collusion with An Chong-bum, former presidential senior secretary for policy coordination,” he said. “Because she never colluded with him, she is innocent.”

Choi and An were accused of coercing 53 companies to donate 77.4 billion won ($65.76 million) to two nonprofit organizations that Choi practically headed. In its indictments, the prosecution made it clear that Choi and An acted “in collusion with the president.”

Lee also denied three other charges against Choi. Jeong Ho-seong, Park’s former personal secretary for 18 years, was also indicted in November on charges of leaking confidential information to Choi that was obtained during his public duty.

The TV network, a sister company of the Korea JoongAng Daily, obtained the tablet PC in October and made bombshell revelations that Choi had access to secret information on state affairs using the device.

The prosecution and Choi’s lawyer had a particularly sensitive debate about Choi’s demand to examine the tablet PC’s evidentiary power. “There is no official criminal charge about exploiting state affairs for personal gain,” Lee, Choi’s lawyer, said. “But if this trial is about the suspects who exploited state affairs, then [the tablet PC] is extremely important when deciding the degree of punishment.”

The prosecution refuted Lee’s argument, citing that the tablet PC is evidence selected for a separate trial on Jeong’s case. Only when Jeong challenges the prosecution’s decision to use it in his trial will they produce it, prosecutors said.

The courtroom for the pretrial conference has 150 seats and 80 people, who previously applied and were selected to observe, watched the session. Choi and two other suspects, An and Jeong, were given a choice as to whether they would like to have jury trials, but they declined. The court said it will have another pretrial conference on Dec. 29 and select evidence.