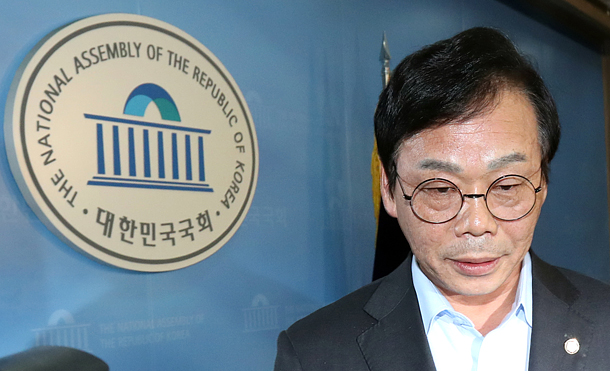 Saenuri Rep. Yi Wan-young leaves the press room in the National Assembly after holding a press conference on Monday to deny accusations of his role in coordinating testimonies with witnesses before this month’s parliamentary hearings. [YONHAP]

Opposition parties demanded Monday the expulsion of two ruling party lawmakers from the special parliamentary investigation committee, following accusations that they had coordinated testimonies with witnesses before this month’s hearings on the abuse of power scandal surrounding the president and her friend.

In November, the National Assembly formed a special investigation committee and launched a probe into the unprecedented political scandal that led to President Park Geun-hye’s impeachment. Over the past weeks, a series of hearings have taken place to look into the scandal over the power Park gave to her longtime friend, Choi Soon-sil, in state affairs.

Saenuri Party Reps. Yi Wan-young and Lee Man-hee, both members of the committee, were suspected of coordinating their questions and answers with key witnesses who are Choi associates before the hearings. They were accused of contacting Jeong Dong-chun, chief director of the K-Sports Foundation, and Park Heon-yeong, the foundation’s former manager, and asking them to commit perjury.

Rep. Yi held a press conference Monday afternoon and denied the accusation. “I swear with my lawmaker post that I never told K-Sports Foundation manager Park to commit perjury,” he said.

The JoongAng Ilbo reported Monday that he met with K-Sports Foundation Chief Director Jeong on Dec. 4 and proposed that the witnesses should lie about a tablet PC, a key piece of evidence showing Choi had unauthorized access to confidential presidential information.

Jeong is the owner of a sports massage center that Choi frequently visited since 2010. At Choi’s recommendation, he was named the chief director of the foundation in May. Jeong and Yi are from the same high school.

Ko is a former associate of Choi. He once headed the Blue K, a shell company suspected to be owned by Choi, but he had fallen out with her because of her mistreatment of him.

“I wanted to hear the stories from Park directly,” said Yi, “so Jeong telephoned him and asked him to join us. But Park didn’t come.”

Yi said he had another meeting with Jeong on Dec. 9 and told him it was inappropriate for him to discuss hearsy stories in front of media, so Park should make them public himself. The lawmaker also said his meeting with Jeong is an ordinary part of a parliamentary investigation. “Lawmakers conducting the special investigation often meet with witnesses before hearings to verify claims and clarify facts,” Yi said. “Both the ruling and opposition lawmakers do this.”

He said a lawmaker of the Minjoo Party of Korea met with Ko twice in December, stressing that he was not the only one who contacted witnesses before hearings.

The opposition parties fiercely condemned the two Saenuri lawmakers and demanded their expulsion from the special investigation committee. “The committee members are supposed to investigate the truth and raise questions on behalf of the people,” said Rep. Woo Sang-ho, floor leader of the main opposition Minjoo Party of Korea. “If some of them coordinated testimonies with witnesses in advance in order to cover up the truth, this is an act of crime.”

“If an investigator meets a suspect in advance and coordinates a testimony, this is a crime,” Woo said. “The two Saenuri lawmakers must be replaced from the committee. The Saenuri Party must also conduct an internal investigation and come clean about how this happened.”

The ruling Saenuri Party lawmakers also said they are baffled about the situation. They said the special investigation committee’s integrity and accomplishments are compromised because of the allegations and demanded Reps. Yi and Lee to explain their positions.