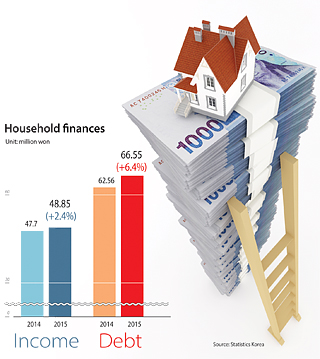 Average household income is growing at a slower rate than household debt, the government said Wednesday, as Koreans are spending a fourth of their earnings on principal and interest.

“It appears that many small-business owners went through hardships in 2015 and they have borrowed more money from financial institutions,” said an official at Statistics Korea. “Housing prices that have risen and the relatively low borrowing rate in Korea also led more people to take out mortgage loans.”

Data showed that high-income earners borrowed more than those with more modest earnings.

In 2015, the average debt owed by a household in the lowest, or first tier, income group, was 12.86 million won, while it was 157.2 million won for the highest income earners, or the fifth tier. Although 47 percent of the debt is owned by the highest income earners, more than 70 percent of those in debt said they feel burdened. Among them, 74.5 percent said they are cutting their spending and savings.

The debt service ratio (DSR) for Korean households surpassed 25 percent for the first time to reach 26.6 percent as of March. The figure means that a household spends 266,000 won a month after earning 1 million won on paying principal and interest toward debt.

The ratio surpassed 20 percent for the first time in 2014 and rose to 24 percent last year.

“In 2015, the household income growth rate slowed as income from the labor market and businesses has slowed, but risks coming from high household debt will be limited as most of the debt is owed by those in the high income group and local financial institutions are becoming more financially stable to deal with debt issues,” said Kim Ie-han, a director at the Ministry of Strategy and Finance.

According to a Finance Ministry analysis of the statistics agency’s data, household income from the those in the labor market dropped in 2015. The Finance Ministry cited the Middle East Respiratory Syndrome that hit the country in 2015 as one of the other big factors that dragged down small businesses.

The government said 70.2 percent of debt is owed by the top 40 percent of income earners, which isn’t much of a problem since they are able to repay their debt. The ministry added that local financial institutions are lowering late payment fees as well.

Statistics Korea conducted the joint survey with Bank of Korea and the Financial Services Commission on 20,000 households from March 30 to April 18.