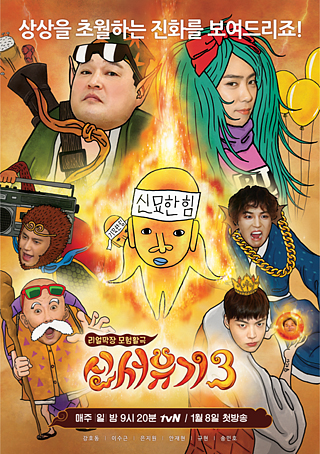 The newest season of tvN variety show “New Journey to the West,” with the addition of its newest cast members, is set to air early next month.

According to an announcement by the cable channel on Monday, the first episode of the highly anticipated travel program will air on Jan. 8. Joining the four original cast members (comedians Kang Ho-dong, Lee Soo-geun, singer Eun Ji-won, and actor Ahn Jae-hyun) in the second season will be newcomers Song Min-ho from boy band Winner and Kyuhyun from Super Junior.

The previous season of the popular series, which airs on both television and online streaming platforms, achieved 5.5 percent in viewer ratings, as well as drawing a combined 64 million views online.

The show is well-known for reuniting the original cast and producer from the “golden era” of the KBS2 variety show “1 Night 2 Days,” which aired from 2007 to 2011. Although singer Lee Seung-gi could not join the cast of the tvN show since the second season due to mandatory military duties, his spot has since been filled by Ahn.