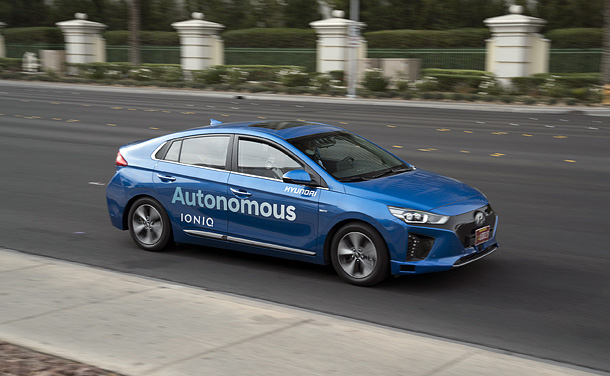 Hyundai Motor has joined a 27-member multinational consortium created to develop autonomous driving technology. The top Korean automaker is the only Korean member of what is expected to be the largest global consortium working on the technology.

“Hyundai Motor joined the consortium to discuss and share the latest global trend of autonomous driving technology,” its spokesman said.

Initiated by the World Economic Forum (WEF) in May, the global consortium represents 12 carmakers, including General Motors, Toyota Motor, BMW, Volvo, Nissan, according to a Nikkei Asian Review report on Monday.

The other 15 members are in a range of industries such as IT - represented by Uber, Qualcomm and Ericsson - and the insurance industry, represented by Liberty Mutual Group and Sompo Holdings. From logistics, United Parcel Service joined the group.

According to the report, the consortium members will start road tests this month in Boston at an event supervised by Renault and nuTonomy. NuTonomy is a three-year-old technology start-up spun off from the Massachusetts Institute of Technology.

In addition to collaborating on driverless car technology, the members will work on global safety standards as well as brainstorming the new technology’s impact on the logistics and insurance industries.

Participants will gather every two months to share ideas. They will announce any progress at the WEF annual meeting in Davos, Switzerland.

The WEF-initiated consortium is not the first partnership formed in the autonomous driving industry, bringing down barriers between diverse industries.

In November, another multinational association called the 5G Automotive Association (5GAA) was founded, which includes major IT and car industry players from around the world.

SK Telecom, the nation’s leading mobile carrier, was the first Korean company to join that global association along with Vodafone, Deutsche Telecom and Valeo. BMW, Mercedes-Benz and Audi were among the car companies that joined the group.

The 12-member association said it plans to create a task force to develop future car technology and push for its commercialization.

While collaboration is being tried by some players, Telsa Motors and Google are developing their own future car technologies.

Meanwhile, Hyundai Motor said it held a test drive event for local media in Las Vegas on Thursday of its fully electric and hybrid Ioniq models, which safely drove a full 4 kilometers (2.5 miles) in the casino city’s metropolitan area. Hyundai Motor will unveil the technology at the upcoming Consumers Electronics Show.